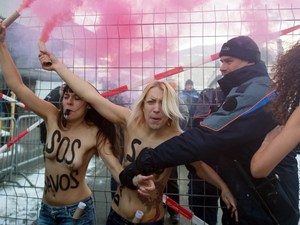 A trio of topless feminist activists set off pink flares and staged a noisy protest in the bitter cold outside the Davos forum for the global elite on Saturday.

Braving sub-zero temperatures in the Swiss ski resort, the women from the Ukrainian group Femen tried to break through a security fence before police guarding the World Economic Forum bundled them away.

It was the second year running that the group has protested at Davos, where politicians, business leaders and officials from around the world gather for a frantic round of seminars and cocktail parties.

The women -- one Ukrainian and two Frenchwomen -- arrived at the fortified Kongress Zentrum in Davos wearing heavy khaki coats, before stripping off to reveal that they were wearing just denim shorts and tights.

With "SOS DAVOS" daubed across their breasts in thick black pen and "Poor for Being Women" written on their bare backs, the three chanted slogans, blew whistles and lit flares that belched out clouds of bright pink smoke.

They then briefly pushed their way past a metal security fence before police officers in bulky jackets pushed them back.

Finally the women, still struggling and topless, were carried off by police.

"Today Femen activists came to scream SOS in Davos, SOS from all women from all over the world, because we are tired of looking at those guys who are under protection, eating caviar and drinking champagne pretending they care about (the) women question," said protester Inna Shevchenko, from Ukraine.

"But all the time when they discuss women in economics it's a discussion about one thing -- how to earn money more using women -- because women are always treated as slaves, as cheap workers they can use."

Shevchenko added: "We are using our naked body, our nudity, sharing a new interpretation about nudity."

The Femen women's power group has been making headlines since 2010 for topless feminist, pro-democracy and anti-corruption protests in Russia, Ukraine, the Vatican and London.

In September they set up their first "training center" in Paris.