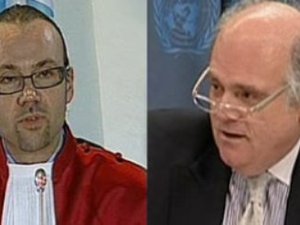 Judge Antonio Cassese, President of the Special Tribunal for Lebanon, has set a deadline of June 10 for STL Prosecutor Daniel Bellemare to file a response, if any, to the appeal filed on May 23 by Maj. Gen. Jamil Sayyed, Lebanon’s former General Security chief, against STL Pre-Trial Judge Daniel Fransen’s ruling on the disclosure of more than 270 investigation documents to Sayyed, STL’s press office said Wednesday.

“The Prosecutor shall file a response, if any, to the Appeal by 10 June 2011 and the Appellant a reply thereto, if any, by 22 June 2011,” says Cassese in his scheduling order.

On Thursday, Fransen ordered that Sayyed, detained for four years in connection with the murder of ex-PM Rafik Hariri, be given access to his case file.

Sayyed was arrested following the death of Hariri and 22 other people in a Beirut bomb attack on February 14, 2005.

"The pre-trial Judge Daniel Fransen, has ordered that the tribunal's prosecutor release more than 270 documents to Jamil Sayyed," the U.N.-backed Special Tribunal for Lebanon said in a statement.

"Sayyed would receive some of the documentation in the possession of the STL prosecutor very soon. A large majority of these will be disclosed to Sayyed, whilst others can only be inspected by his council," it added.

At a previous hearing of the tribunal, Sayyed requested access to his file in order to launch proceedings in another court.

"Judge Fransen ruled that the documents could only be used for 'legitimate purposes'. The use of these documents must respect the presumption of innocence, the right to defense and the right to privacy of third parties," STL said.

Sayyed is one of four former generals detained by the Lebanese authorities between August 30, 2005 and April 29, 2009, in connection with Hariri's death.

"Sayyed claimed that he was wrongly detained by the Lebanese authorities on the basis of libelous denunciations," the STL press release said.

"He has requested documents related to his claim," it added.

He was released just weeks after the establishment of the STL in 2009 following an order by Judge Fransen.