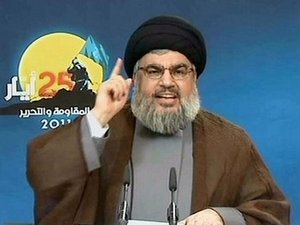 Hizbullah Secretary-General Sayyed Hassan Nasrallah on Wednesday described calls for forming a technocrat cabinet in Lebanon as a U.S. suggestion, noting that “the other camp’s claims of a coup have been refuted because the government has not been formed yet.”

The suggestion to form a technocrat government “was raised by the Americans and the Mustaqbal Movement,” Nasrallah charged.

“Accusations that Hizbullah has taken control of the country and that it isn’t pressuring its allies demonstrate that the other camp does not have a clear position on current affairs,” Nasrallah said in a televised address on Liberation Day.

His speech, marking the 11th anniversary of Israel's withdrawal from southern Lebanon after 22 years, was broadcast on a giant screen to thousands of Hizbullah supporters in the village of Nabi Sheet, a Hizbullah stronghold in the eastern Bekaa Valley.

“This day does not belong to one sect or one party, but to the entire Lebanese population and it should belong to the Palestinians and the Arab nation. The events of May 25, 2000 changed Lebanon and the equation in the region,” Nasrallah said.

“We believe that the existence of a government is necessary to tackle problems in the country … We don’t want a share in government and we only address the people’s concerns,” he added.

"We call on all Syrians to preserve their country as well as the ruling regime, a regime of resistance, and to give their leaders a chance to cooperate with all Syria's communities in order to implement the necessary reforms," Nasrallah said.

It was the first time the reclusive Hizbullah leader has commented on the protests in Syria, which along with Iran is a major backer of his armed group.

“We in Lebanon, especially Hizbullah, are grateful to Syrian President Assad and the Syrian people because they had prevented divisions in Lebanon and the region. They helped maintain Lebanon’s unity and they stopped the Lebanese civil war. They supported the resistance in Lebanon, which resulted in the liberation on May 25, 2000 and the July 2006 victory.

"The difference between the Arab uprisings and Syria ... is that President Assad is convinced that reforms are necessary, unlike Bahrain and other Arab countries," said Nasrallah, who has not appeared in public since 2008.

He also urged his party's supporters to reject sanctions by the United States, the European Union and Canada on his ally.

"We must refuse these sanctions that the United States and the rest of the West are trying to market and convince Lebanon to abide by," said Nasrallah.

He denied as false a report aired by Al-Arabiya television alleging that Hizbullah has sent 3000 members to Syria.

“To all the liars in the Arab world and the journalists who write false reports, I say that if we were to deploy in these countries, we would at least have the courage to admit to it,” said Nasrallah.

Addressing U.S. President Barack Obama’s accusations that Hizbullah has been exercising “political assassination”, Nasrallah denied the allegations as baseless, stressing that the U.N.-backed Special Tribunal for Lebanon probing the 2005 murder of ex-PM Rafik Hariri was an “American-Israeli product.”

“The U.S. is the country that has been involved in most political assassinations. The CIA targeted (late Shiite cleric) Imam Mohammed Hussein Fadlallah in 1985, killing more than a hundred people in the process. It also killed hundreds of thousands of people in Iraq and Afghanistan,” Nasrallah added.

"Obama and Netanyahu have dealt the final, decisive blow to what is called the Arab Peace Initiative," Nasrallah noted in his televised address.

"Is it not time that this initiative be dropped as an option?" asked Nasrallah.

"At the very least, the Arab League should pull the initiative as an option," he added. "No to negotiations. No to Israel. No to the occupation of Jerusalem," said Nasrallah, stressing that “the developments of the past few years have demonstrated that the Resistance is the appropriate, realistic, logical, and productive choice to achieve goals.”

He described the path of negotiations as a “crazy and futile option that doesn’t achieve any results.”

“Hadn’t it been for the Resistance, Lebanon would have been still occupied by Israel,” Hizbullah number one stressed.

The peace initiative presented by Saudi Arabia in 2002 offers Israel full normalization of ties in return for its withdrawal from occupied Arab land and the creation of a Palestinian state.

Netanyahu has rejected Obama's request that negotiations with Palestinians resume immediately and that he agree to the borders that existed before the 1967 Six Day War to form the basis for the talks.

“The Palestinians have no choice but resistance and I call on them to adopt this choice and I urge the Ummah to present all support to it,” Nasrallah said.

This guy is a registered terrorist, why people would listen to him, this is madness and he sound like a zionist

Last time I checked US ideas led to the building of one of the most powerful hegemons in the world. Why should we follow Iranian ideas that will only lead us to hell?

The difference between the Arab uprisings and Syria ... is that President Assad is convinced that reforms and mass murder of Sunnis are necessary.
Hadn’t it been for the Shiite Resistance, Lebanon would have been still occupied by Syria

To Banana Head...It was not US "ideas" that led to powerful criminal empire, but the ethnic cleansing of the native American Indians and the labor of African slavery. Also, sooner or later China will no longer finance US spending and the US econmy will collapse. Good ridance.

what did the resistance really do (Guest) over 9 years

General Michel Aoun 2002 "The Resistance has prolonged the ‎Occupation"

Netanyahu and Nasrallah, two sides of the same coin. Neither believe in negotiation, in fact both reject negotiation; neither believes in the 2002 Saudi Proposal of negotiations based on UN REsolution 242; and both are hoping against hope that Assad's brutal murderous response to the Freedom Demonstrations in Syria succeed.

Because of Nasrallah, Netanyahu can take his hard lines and get away with it before the people to whom he is supposed to be accountable, the people of Israel.

Because of Netanyahu and his hard line, the facade of resistance behind which Nasrallah hides as he pursues his agenda of taking control of Lebanon persists.

had it been the so called resistance

Israel would not have waited until 2000 to leave Lebanon.
Nor would it have destroyed Lebanon and killed more people

It is difficult to decide which lie to comment on. This guy is absolutely pathological.

all terrorist will be dmaned in hell

Shame on Naharnet for allowing people topmost comments which inflame sectarian tensions. It's a reflection of the administrators lack of professionalism. Shame on you Shab for even posting such a stupid remark!

I wish he could say "had it been of Hizballah, the region and Lebanon would have peace and flourish tourism..." .... Until when these people are gonna live in the 19th century ?

Why don't rely on your bosses (the Iranians) to start exercising their muscles and send their men to fight for the cause,after all they claim to be the new superpower.It seems to me that the Ayatollah is a little smarter than I thought,why sacrifice persian blood when you have a big barking dog and a flock of sheep who is willing to die for somebody elses cause.

FROM BAHREIN TO BEIRUT SAME CONFRONTATION

He is asking the sons, daughters and wives of the men who were killed like animals to support the very regime that killed them...People are not daft ya Hassoun...

if the idea of technocrat gov is an usa idea, and never no lebanese politician kept it as "option",so open the door to set up real dialogue to form cabinet with NATIONAL CONSENSUS, because only with TASKS you can abolish all what is told in WORDS, we can not continue being in the forever confusion game what is showed in media, when one day, one politicians says it, and in the next day, he doesnt remember, it is well done, what Nasrallah never mentioned it, but OTHERS HANGING HIS NAME, DID AS THE BREAD OF DAY, this is, every time what they could do it, throwing in the air, like game fire, to catch the atention and aproval for it

Just a few answers to his lies:

The coup failed because the Hezz are weak politically for Lebanon's concerns. Without cash and guns from Iran they are even weaker,

Technocrat is better than Hezbollacrat. Because you don't know who might be picked you might not be able to control them.

The "other camp" is out of the way and you still cannot form a gov't shows that you have no clear direction other than wars and threats.

For your information, M14 won the last war of occupation when they kicked out Syria in 2005 without guns. To kick out a bloodthirsty killer without the use of arms shows real guts and strength.

The people's concerns include everyone paying electricity and not draining one sides wealth and ruining the economy for a fake resistance and Persian stooge group to kill Lebanese to provide the Persians with a Med. base they have tried to have for 2,500 years Thank God for the Greeks and M14 stopping them so far.

Bashar has no resistance or he would have yried to get back the Golan and Antioch. Not only has he not tried, he doesn't even say the words. Stop lying to everyone with you liar speeches.

Bashar only contributes to one side in Lebanon causing a bloody division where M8 makes all the bolld flow against the Lebanese people. Admit the deaths you have ordered in Lebaonon if you are so open and trustworthy with your words. Whom did you order killed?

We have seen Hezz snipers on videos in Syria and the protesters there have identified them as such. Once again you lie.

Also.....the people who are not brainwashed by you are aware of your attempts to use mind control techniques in your speeches. Hitler and others used the same techniques. Unfortunately for you the educated masses do not fall for this garbage. Your tachniques only work on your uneducated murdering gangs.

Enough is Enough. They are keeping Lebanon and the Lebanese People in check and not going forward. If something happened in China it is because of Israel... We need to get over this Israel issues and get rid of this terrorist group so the country can live in peace and propsper....

Thank you Simon. I am 50 years old, and for the last 50 years, i have been fed the same BS, Israel is this, Israel is that, its all because of Israel, restatnce this resistance that. I am sick of it. Its a self fulfilling prophecy with Israel, the only reason they attack us is because we mess with them always whether its when the palestinians where always shooting at them or when Nassrallah and his people took an pledge of allegience to iran and started to mess with Israel. enough is enough. go resist from Syria or Iran and leave us the hell alone to live in peace.