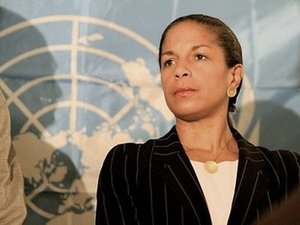 The United States on Thursday accused Syria and Iran of fuelling tensions in Lebanon with illicit arms supplies, which a top U.N. envoy warned was part of a "hurricane blowing up" in the Middle East.

New fears about Lebanon, where the government faces mounting pressure from Hizbullah, were raised at closed U.N. Security Council consultations in which the U.N. leadership again called for the disarming of "Hizbullah and other militias."

U.S. ambassador to the United Nations, Susan Rice, said Syria had shown "flagrant disregard" for Lebanon's independence, and that Syria and Iran were seeking to "endanger stability."

Rice said Hizbullah could only remain the "most heavily armed militia" in Lebanon with "Syria's aid and facilitation of Syrian and Iranian arms" in violation of U.N. Security Council resolution 1747.

The ambassador read a U.S. government statement to reporters as the Security Council debated the heightened tensions in Lebanon and an attack in Beirut on Wednesday on U.N. investigators.

Rice said Syria, Iran and Hizbullah "believe that escalating sectarian tensions will help them assert their own authority over Lebanon. However these actors serve only to destabilize Lebanon and the region.

"Syria especially has displayed flagrant disregard for the sovereignty, territorial integrity, unity and political independence of Lebanon," she said.

Syria's ambassador to the U.N., Bashar al-Jafari, condemned the accusations.

"Ambassador Rice gave credibility to wrong facts," he told reporters, highlighting comments made by Lebanese officials for a U.N. report that they had no evidence of arms smuggling across the Syrian border.

Terje Roed-Larsen, U.N. Special Envoy for the implementation of UNSCR 1559, said that the country is in a "hyper-dangerous" state and called for urgent efforts to disarm groups "such as Hizbullah."

He said the United Nations did not have the means to investigate the U.S. allegations of Syrian and Iranian arms supplies, but said: "There is a consistency between allegations we are hearing and statements from Hizbullah itself concerning their capabilities."

"These weapons are of course not coming from the moon."(AFP)