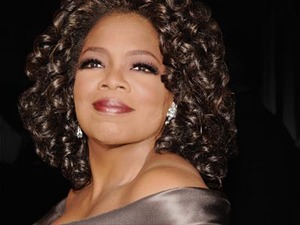 Talk show queen Oprah Winfrey bade farewell to her trailblazing television program Wednesday, ending 25 years of intimate star confessions by telling loyal fans they had been the love of her life.

In a program taped a day earlier at Oprah's Harpo Studios in Chicago, Winfrey took to the stage and, in what has become almost a mantra over a quarter-century, urged her audience to follow their dreams.

"Start embracing the life that is calling you and use that life to serve the world," Winfrey said in the show being broadcast across millions of U.S. homes.

She said she had initially seen the show as a job, but then it morphed into something else. "Something in me connected with each of you in a way that allowed me to see myself in you and you in me. I listened and grew and I know you grew along with me."

If she had one regret it was that she had not been able to focus more attention on the issue of the sexual abuse of children, Winfrey said.

"People ask if I have regrets," she said. "I have none really about the show, but the one thing I feel I was not able to bring attention to even though I tried in 217 shows was the sexual molestation and rape of children. Worse now with the Internet than when I first spoke of it in November 1986."

Breaking down many taboos, Winfrey has herself talked openly about being abused as a child, after being born into a life of poverty in Mississippi.

On Wednesday, Winfrey's famous couch had been replaced with a single chair onstage, as the daytime-TV doyenne, credited with encouraging Americans to openly discuss their deepest hopes and fears, stood alone and center-stage.

Amid a collage of past highlights, Winfrey occasionally poked fun at her long-gone outfits and accessories. But most of her remarks focused on what she called her "journey."

"I always wanted to be a teacher and this is the world's biggest classroom," she said.

"I hope what you will take from this show is to live from the heart of yourself," she said, as her longtime partner Stedman Graham watched from the audience accompanied by her fourth-grade teacher Mrs Duncan.

Winfrey, 57, is one of a select group of celebrities crowned an entertainment deity in the United States.

She made the transition from local television show host to national syndication in 1986 as the antithesis of what a TV talk show host was supposed to look like.

An overweight, emotive African-American woman, rather than the usual hard-driving, white male television host, she seemed an unlikely candidate for U.S. superstardom.

But her unusual blend of self-help and celebrity confessions became wildly popular with middle America, and Winfrey ultimately became one of the most successful celebrities in US and global entertainment.

As the show drew to a close, Winfrey became emotional, a few tears escaping as she looked back on what she would call her "life's journey."

"I am truly amazed that I, who started out in rural Mississippi in 1954 when the vision for a black girl was limited to being either a maid or a teacher in a segregated school, could end up here," she said.

And she thanked her fans for "the genuine kindness, affection, trust and validation from millions of you all over the world.

"From you whose names I will never know I learned what love is. You and this show have been the great love of my life."

An estimated 40 million Americans watched her show each week, which is distributed in 150 countries. And she is not disappearing from TV screens, as she will now turn to running her own network, OWN.

Thanks to her business savvy, Winfrey is today one of the world's richest women, heading a multimedia entertainment conglomerate, with ventures in theater and Hollywood film.

She also is a massive force in the book publishing industry thanks to her on-air book club.

She even had an influence in politics, famously risking alienating part of her viewership by endorsing then-candidate Barack Obama in the last presidential election.

"We call ourselves Oprah show babies. Your voice has been the soundtrack of our lives," Fanning said. "We've learned from the Oprah show that we are enough. That we matter, that our lives are of value."