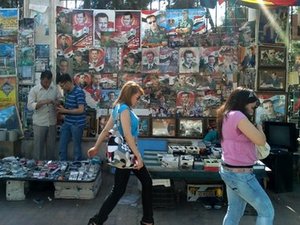 The uprising against Syrian President Bashar Assad is eviscerating the country's economy, threatening to hit hard at the business community and prosperous merchant classes, which the embattled regime relies on to help retain its grip on power.

About two months of violent protests around the country have shuttered businesses, driven away tourists and thrust Assad's regime into an unprecedented political quagmire that found its roots in the uprisings in Egypt and Tunisia. Economic growth rates that had hit around 3.5 percent in fiscal 2010, are seen, according to some estimates, contracting by 3 percent in fiscal 2011.

That spells trouble for the Western-educated president, who spent years shifting the country away from the dreary socialism espoused by his father and, in the process, helped boost a new and vibrant merchant class that transformed Syria's economic landscape even as the regime's political trappings remained unchanged. So far, the monied classes have clung to the sidelines, but if the economic squeeze reaches them, it could be a game changer, analysts say.

"If (the opposition) can do enough to paralyze the Syrian economy — as it is now paralyzed — the government will slowly fail," Joshua Landis, director of the University of Oklahoma's Center for Middle East Studies, told The Associated Press in an email.

The regime is already suffering, both domestically and before the international community. Its brutal crackdown on dissent has killed more than 1,000 people since mid-March, human rights groups say, while key revenue sources like tourism are drying up. If business comes to a halt, private enterprises go bankrupt and government cannot pay state employees, there will be very little to prop up the regime.

Aside from the internal troubles, Assad's government faces external pressures.

The U.S. and the European Union have imposed sanctions on the regime, which could hasten serious economic damage in Syria. The European Union instituted an assets freeze and a visa ban Monday on Assad and nine members of his regime, and new U.S. sanctions also target Assad and senior aides.

But for now, the opposition has yet to bring out the middle and upper middle classes in Damascus and Aleppo, the two economic powerhouses.

"The monied classes have too much to lose from prolonged instability, and the opposition cannot offer them any convincing scenario for a peaceful transition to democracy or regime change," said Landis, who runs an influential blog called Syria Comment. "They fear instability above regime repression."

Since the uprising began in mid-March in the impoverished southern province of Daraa, massive protests have been taking place every week in relatively poor areas.

The catalysts mirror the factors that fueled the unrest elsewhere in the Arab world — — high unemployment, a wide disparity in income distribution and a high cost of living, among others. A drought hitting parts of the country displaced tens of thousands of people from farming areas, putting more pressure on the economy.

While the country saw an upsurge in credit growth, private banking, trendy stores and coffee shops as part of the economic liberalization, the benefits of the reform in Syria, like in Egypt and Tunisia, failed to trickle down.

The current troubles only compound an already muted economic picture before the unrest began. Syria's public debt stands at about 74 percent of GDP, second only to Lebanon, according to figures from London-based consultancy, Capital Economics. Deficit spending is likely to only expand as Assad, looking to allay unrest with promises that have so far failed to convince the demonstrators, offers new incentives in the form of new subsidies, lower gasoline prices, among others.

The absence of the merchant and middle class in the protests has so far been one of the few factors working in Assad's favor, and is a stark contrast to the revolts in Egypt and Tunisia which saw a far broader cross-section of society turning out.

In Egypt, the middle class was among the hardest hit over the past few years.

While the poor essentially got poorer amid the rampant corruption and cronyism that defined former Hosni Mubarak's regime, professionals saw the cost of living soar while their salaries stayed the same, often lagging inflation. That kind of inequity helped bring a range of people out into the streets — from stock brokers to fundamentalists, bankers to bakers.

Syria has been quick to downplay the effect of the uprising, even though its foreign minister acknowledged on May 23 that the sanctions would hurt the country.

But there are clear signs of strain and Syria, unlike some other Arab countries that have been able to stave off unrest with their oil wealth, has little on which to fall back.

Last month, the International Monetary Fund lowered Syria's economic growth rate this year from 5.5. percent to 3 percent. The International Institute of Finance paints an even bleaker picture, projecting that GDP could contract by as much as 3 percent in fiscal 2011.

The currency is also being hard hit. Shortly after the crisis began, the Syrian pound lost as much as 17 percent of its value in the black market, hitting 54 pounds to the dollar — its lowest level in five years, according to traders.

Meanwhile, tourism, which last year accounted for roughly 12 percent of GDP and brought in $8 billion in had currency, has fallen sharply.

"The Syrian economy is in shambles," said Louis Hobeika, an economist at Lebanon's Notre-Dame University. "There will be no tourism. Who wants to go for tourism in Syria?"

The answer is clear in the absence of visitors to Damascus' historic Hamidiyeh market, an area of the Syrian capital typically bustling with western, Asian and Arab tourists. These days, there are few buyers.