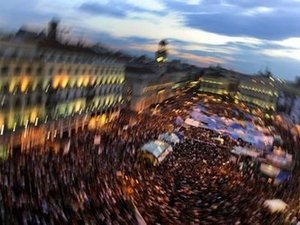 Known as the "indignant", or "M-15" after the protest birth date, the activists began May 15 with a few hundred people camped in Madrid decrying Spain's parties for an economic crisis.

Indeed, the social network is at the heart of a slickly organized logistical operation.

One activist, a 28-year-old translator who identifies himself only by his nickname Zulo, is dedicated to updating the Facebook page of "Spanish Revolution."

Connected via wifi antennae set up by neighbors and businesses and powered with solar panels, a dozen laptops are hooked up in the camp's "communication" stand.

Whether it is requesting supplies, giving advice in case of police intervention or linking to other city center protests across Spain, social networks are "an essential tool for us", Zulo said.

"At first we were stunned, we were overwhelmed by the scale of the mobilization on the Internet, we received so many messages of support," said Zulo, his hair bunched up in a tail of dreadlocks.

In the first days after the creation of the Facebook page Spanish revolution -- https://www.facebook.com/SpanishRevolution -- the account had 1,000 supporters registering every hour. Now it has more than 146,000.

On micro-blogging site Twitter, the hash tags #acampadasol (Sol encampment), #notenemosmedio (we have no fear), #nosquedamos (we are staying) or #spanishrevolution have been among the most popular in Spain. Twitter account acampadasol had more than 50,000 followers.

"There are eight of us updating social network accounts with our computers or smartphones," said Zulo, sporting a green T-shirt emblazoned with the words "social networks".

"Even if you cannot compare our situation to that of Arab countries, like them the role of social networks has been fundamental," he said.

"But all that is virtual. And we are asking those who support us on the Internet to come down into the streets with us."

The movement rallied 60,000 mostly young people across Spain at its peak on the eve of Sunday's local elections, protesting a jobless rate of more than 22 percent, political corruption and welfare cuts.

On April 7 thousands of young people had already protested in Madrid under the slogan "Youth without future." The unemployment rate among under-25s in the workforce in February was 44.6 percent.

In the latest protests that began March 15, thousands came into the streets in response to calls by Democracia Real Ya (Real Democracy Now) spread through social networks.

"Now the role of the social networks is to let us carry on getting our message out, so the movement can continue beyond the Puerta del Sol encampment," said a spokesman, Pablo Prieto.

"Communication is instantaneous and more direct than via the traditional media," he said.

A new Twitter account, takethesquare, has just been created to send the message of the "indignant" worldwide. On Wednesday it had 2,711 followers, and counting.