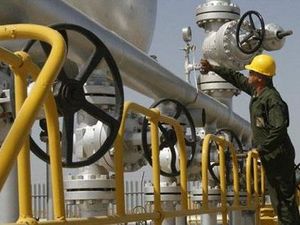 The crude oil market drifted lower on Thursday as traders banked their profits after two straight days of gains.

"It's just a retreat after a strong two-day rally, and some profit taking," said VTB Capital commodities analyst Andrey Kryuchenkov.

Crude futures had rallied on Tuesday and Wednesday after U.S. banks Goldman Sachs and Morgan Stanley both raised their 2012 forecasts for Brent to around $130 a barrel.

Meanwhile on Thursday, prices were also dampened by news of a surprising increase in crude stockpiles in the United States, which is the world's biggest oil consuming nation.

The U.S. government's Department of Energy announced on Wednesday that crude reserves rose by 600,000 barrels in the week to May 20, confounding analyst expectations of a fall and indicating weaker demand.

Last week also saw U.S. gasoline inventories jump by a huge 3.8 million barrels, in contrast to predictions of a drop.

Gasoline figures are being closely watched ahead of the peak-demand driving season in the United States starting next week, when many Americans begin hitting the road for their summer holidays.