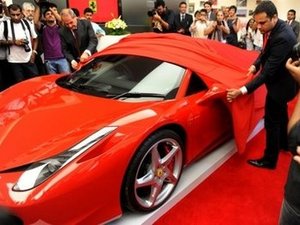 Ferrari launched its first dealership in India on Thursday, seven years after it entered China but with the same aim of satisfying demand for flashy cars from the growing class of Asia's super-rich.

The full range of sports cars from the Italian manufacturer will be on sale, with the cheapest model, the California, priced at 22 million rupees (485,000 US dollars) after punitive import tariffs of more than 100 percent are applied.

"We decided that after 2010 India was ready for Ferrari," group chief executive Amedeo Felisa told reporters at the launch of the dealership in central New Delhi.

"New models are coming this year on the market, so why not use this moment to enter a new market?" he said. "India is the 58th country where Ferrari is present in the world."

There are already about 50 privately imported Ferraris on India's potholed and congested roads, including one belonging to Indian cricket superstar Sachin Tendulkar who reportedly drives at night to avoid the traffic.

Ferrari said it sold about 300 cars from 12 dealerships in China in 2010, about five percent of the total 6,500 cars produced annually by the Maranello-based group.

The number of Indians who have financial assets of over $1 million, excluding main residences, now stands at 127,000, the 2010 World Wealth Report by Merrill Lynch Capgemini says.

According to a recent survey of 160 financial advisers by the private banking arm of Citibank, Indians are also the most likely members of the global super-rich to spend on private jets and yachts over the next few years.

In April, Aston Martin joined the list of luxury marques driving into India, where Ferrari's long-time Italian rival Lamborghini already has a dealership.

The country is also home to the world's biggest number of poor people. Some 42 percent of Indians, or 455 million people, live on less than $1.25 a day, according to the World Bank.

India's statistics on health, infant mortality and malnutrition are worse than those for some countries in sub-Saharan Africa.