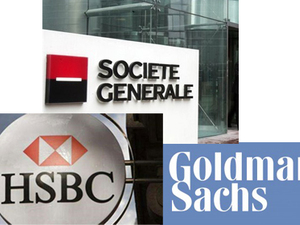 HSBC, Goldman Sachs and Societe Generale are among a number of banks holding $53 billion (37 billion euros) of Libyan state assets, documents leaked to an NGO revealed on Thursday.

Global Witness said that on June 30, 2010, HSBC held $292.69 million across 10 accounts and Goldman Sachs had $43 million in three accounts, in various currencies.

The amounts were confirmed in an independent audit document that was produced for the Libyan Investment Authority (LIA).

The LIA also invested $1.8 billion in three different funds managed by Societe Generale -- although at the time of the report, obtained by campaigning group Global Witness, it was worth just over $1 billion.

Global Witness called on regulators to check that the funds were not diverted to Gadhafi's private accounts, for the banks to come clean, and for a new law requiring banks and investment funds to disclose all state funds they manage.

"It is completely absurd that banks like HSBC and Goldman Sachs can hide behind customer confidentiality in a case like this," said Charmian Gooch, director of the group.

"These are state accounts, so the customer is effectively the Libyan people and these banks are withholding vital information from them," he alleged.

The leaked document reveals that $171 million was held in funds or products with JP Morgan, and $329 million with OCH-ZIFF.

A further $19 billion was held in Libyan and Middle Eastern banks, including the Central Bank of Libya, the Arab Banking Corporation and the British Arab Commercial Bank.

Washington and the European Union imposed sanctions on the LIA earlier this year when fighting broke out between Gadhafi's forces and rebels against his four-decade rule.

Goldman Sachs and HSBC declined to comment on the Global Witness report.

But a source at HSBC said the British Treasury department would have been informed of the Libyan funds held by the bank when they were frozen under sanctions.

The source added that the LIA had had authorized entities in Britain and the United States which were regulated as any others.

A Societe Generale spokeswoman in Paris said: "Societe Generale deals with many sovereign funds and complies with all applicable rules and regulations in that matter. The bank cannot comment on any specific client or transaction."