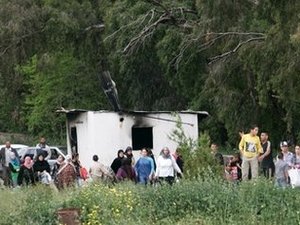 A delegation from the U.S. Embassy in Lebanon traveled to northern Lebanon on Thursday to follow up on the status of Syrian civilians who have fled the violence in Syria, the embassy announced in a statement.

“The delegation also investigated press reports that Lebanese security agencies have repatriated some of these displaced people to Syria against their will,” the embassy added.

“The United States calls on the Lebanese government to work with the U.N. High Commissioner for Refugees and other international organizations, including the International Committee of the Red Cross to fulfill its obligations under international law to provide protection to Syrian citizens fleeing to Lebanese territory regarding their potential refugee status,” the embassy said in its statement.

America will care about these refugees the way they have cared about palestinian refugees who were ethnically cleansed from Palestine 63 years ago. How long will this divide and destroy policy will work before it explodes in their face like in Afghanistan, Iraq, Vietnam, and the rest of the world.

LOL...These people are a bunch of nomads with no home and taking advantage of the situation. Disgraceful and faithless America again adding fuel to the fire. The day will come when you will 100km tornadoes ripping through your central and coastal inhabitant area if not the whole east coast .. maybe only then you may wake up and realise that you are weakening the Christians of the Middle East for the sake of your interest in Oil and control of the Muslims. You have done enough damage in Europe to say the least when it comes to western developed nations.

Audaciously, US Embassy in Beirut issued a statement about a visit by a team from the Embassy to the Syrian-Lebanese border to check on the status of Syrian refugees there. I mean, what business is that for the embassy? Can you imagine if a team of the Lebanese Embassy in Washington, DC visited the US-Mexican border to check on the status of labor refugees there? Team members would most likely be either shot at or be sent promptly to Guantanamo. But then again: Lebanon is a country with no sovereignty; i.e. a country that should never have existed. It has only been created like Jordan to assist the terrorist state of Israel.