Baroud Ends his Duties as Caretaker Minister: An Acting Minister Can Carry Out this Mission 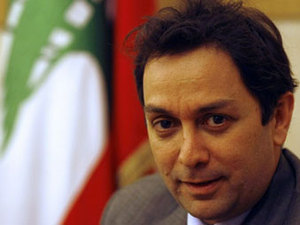 Caretaker Interior Minister Ziad Baroud announced on Thursday that he will no longer carry out his duties as a caretaker minister.

He said during a press conference in response to this morning’s incidents at one of the Telecommunications Ministry buildings in the Adlieh district: “It appears to me that reason in Lebanon has taken a holiday and the law has become a point of view.”

“I have come to realize in the past few days that the problem in Lebanon is much greater than it appears to be,” he stated.

“Because I don’t want to act as a false witness or a caretaker minister whose role is limited to signing the ministry’s mail, which something an acting minister can do, and because I refuse to violate the constitution … I have liberated myself of these tasks,” he stressed.

“I say to the Lebanese that taking them hostage is no longer acceptable,” Baroud said.

The minister asserted that he has long refused to take sides in the ongoing political divide in Lebanon, adding that the political camp that caretaker Telecommunications Minister Charbel Nahhas is affiliated with has not spared him its criticism, while he is not disputed with the other political camp.

Earlier on Thursday, security forces prevented Nahhas, several directors at the ministry, and a technical team from entering one of the ministry’s buildings at the Adlieh area.

Sources told Naharnet, that the minister and the technical team headed to the building in order to dismantle a mobile phone station belonging to OGERO Telecom.

Later Thursday, Baroud issued a statement in which he expressed his “extreme regret over mentioning the name of President Michel Suleiman in remarks” voiced by some parties Thursday afternoon, stressing that the president has never abandoned his support for him.

Baroud stressed that his step, “which stemmed from keenness on implementing the law, is totally in line with President Suleiman’s stances and keenness on state institutions.”

For his part, Suleiman held phone talks Thursday with caretaker Justice Minister Ibrahim Najjar on “whether it is possible for the public prosecutor’s office to tackle what happened today” at the telecom ministry building, state-run National News Agency reported.

Suleiman and Najjar discussed specifically the issue of “the Internal Security Forces’ refusal to implement the interior minister’s resolution stipulating the withdrawal of the ISF personnel from the telecom ministry building,” according to NNA.

What a disgrace...shape up or shape out...can't handle the criticism or rather the truth.

There goes the true working minister for the peoples, of the peoples of Lebanon. this is a lost for the land of the ceaders

Baroud orders the ISF to evacuate the building of the Ministry of Telecommunications immediately. When Rifi refused his superior's orders, Baroud ended his duties. Plain and simple. The president of the republic is either incapable of supporting his minister or is involved and approves what is going on. This is the kind of country that we live in. LONG LIVE BILAD AL MAFIA WAL FASAD.

Mr. Baroud I like you but you should have to courage to say that the Aounist are the trouble makers and Amal & Hizb are hijacking the state of Lebanon.

It is better for Baroud to stay out of any cabinet formed by M8 or M14. They have both failed Lebanon miserably. Instead of being the shining star on the hill illuminating the path of Arab youth, we have become a laughing stock mired in hatred and destructive impulses. M14 transformed the universal principles of freedom, justice, democracy and independence of the Cedar Revolution into sectarian hateful slogans lacking any vision for Lebanon future or how to modernize our institutions to achieve a transparent democracy. M8 actions selling Lebanon to the region's tyrants are actions of Grand Treason. Nassrallah and Berri area black spots harming our great Shia community. Hizbollah has been created, funded, indoctrinated and armed by Iranian radicals. It is simply an occupation army and a poison to freedom and democracy. Aoun has the same inflated ego, mental instability and destructive inclinations of Khadafi. But patience! Cedar Revolution II is coming in 2013. We’ll need you then!

What a loss to the country, I really liked the changes Baroud was responsible for and the law abiding attitude he carried (within his limits). This guy was the best thing lebanon had going for them; he was self made, not corrupt, properly educated and needn't a family member to put him in power. If Lebanon was left to him we would be generations ahead, both socially and economically.

Irony of the day: The good guy is out and the scum bags are still in. Congrats to all of us

Sanctify Yourself (Guest) over 9 years

He's doing the right thing! As a Minister, he gave orders for the ISF to withdraw which did not happen probably because the ISF takes orders from a gang and not the Minister himself.

Well done Minister Baroud. These people definitely don't deserve the services of a dedicated man like yourself. Sadly enough, they prefer life in the form of a farm.

what a shame, he has the decency to resign while the thugs remain in power.

Lebanon is not much better than the most under-developed countries on Earth. I have traveled the globe and I tell you with full confidence that we are as 3rd world as you can go. It sickens me to see that we Lebanese, who are involved in the development of many countries around the world, and we Lebanese, who have some of the most intellectual people contributing to mankind (to name a few: Charles Malik – drafted the United Nations Universal Declaration of Human Rights, Carlos Slim Helu – Richest man in the world, Carlos Ghosn – CEO Renault / Nissan, Elie Saab – who is one of the most sought after designers in the world, and many others who are dispersed and spread all over the globe that do not appear on headlines: From Vice Presidents, to engineers, to ministers, etc…), prefer to be more loyal to their religion and/or political parties than their own country…

We cannot deal with the smallest of Lebanon’s problems without having political interference due to personal interests by the heads of the parties.

It is a shame that some one like Baroud had to resign. He is the ONLY patriot that has come to office in a very long time. He has so much potential, yet, he was only able to perform tasks “allowed” to him by the political authorities.
Everyone else in Lebanon, all of them (from Hariri to Nasrallah, from Aoun to Geagea), are all pursuing personal interests.
No one cares about “Libnen awalan” (Lebanon First). They all care about their pockets / their weapons / their power / their pride…all this while Lebanon is going down the dumps.

Gas prices are through the roof and continue to rise… We still haven’t been able to solve our electricity problem (some African countries already have 24/7 power)… We have unsustainable price levels for a country that lives on a minimum wage of ~300$… We have the most corrupt governmental institutions in the world, where by tipping some one 20$ will get you what you need… We have mafia-like ways of recruiting where a person is hired (or fired) based on his religion or political interests… We have no proper public transportation (which would bring the government added income, reduce the horrible traffic on the streets, and provide a convenient means for students, tourists, employees, etc…) … The police are afraid of punishing law-breakers on the grounds that these people might have a “wasta”… In what normal country in the world are the police the ones to be afraid of the people???

Simply put, we have nothing going right in Lebanon... Nothing… And this obviously affects the residing population. A survey was done some years back (2007), and it found Lebanon to have the 6th most depressed population in the world.

We are the highest per-capita users of anti-stress drugs in the world.

Forget the statistics. Just look around while driving through traffic. Notice how everyone honks, pushes, and swears at each other on the roads. Lebanese are sitting on a bag of nerves that is eventually going to explode one day unfortunately.

The only thing that can save our country from going-over board is a government that is patriotic before it is political. To make this happen, we need to bring an end to our “tribe like” mentality. A mentality Thomas Friedman portrayed excellently in his book “From Beirut to Jerusalem”.

We had hope in Baroud… He was a patriot who belonged to no tribe; only to Lebanon. Unfortunately the political sides handicapped him, and with that we know Lebanon has no more hope.

I leave you with the below quote written about Lebanon, which is extracted from a book published in 1870 called “The Land and the Book”… after 150 years, we have not evolved:

“They can never form one united people, never combine for any important religious or political purpose ; and will therefore remain weak, incapable of self-government, and exposed to the invasions and oppressions of foreigners. Thus it has been, is now, and must long continue to be a people divided, meted out, and trodden down.”