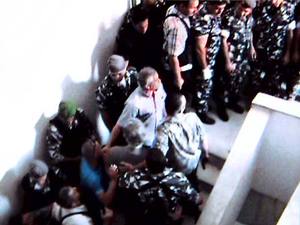 President Michel Suleiman has reportedly ordered Internal Security Forces chief Maj. Gen. Ashraf Rifi to clear a building affiliated with the Telecommunications Ministry from his men after they prevented Caretaker Telecom Minister Charbel Nahhas from entering the facility on Thursday.

Sources close to Suleiman told several Beirut dailies published Friday that after the president studied the issue legally and constitutionally, he told Rifi to abide by Caretaker Interior Minister Ziad Baroud’s order to pull his forces out of the building in Beirut’s al-Adliyeh area.

“A director-general should comply with the decisions” of Baroud “who is the man in charge of the ministry,” they said.

Baroud absolved himself from his duties on Thursday after the ISF led by Rifi failed to carry out his orders to withdraw from the facility and allow access to Nahhas.

Nahhas, accompanied by a number of technicians, attempted to access the building to dismantle equipment donated to Lebanon for a third GSM network.

Suleiman holds onto the law and the authority of the minister on issues linked to state-run authorities and institutions, the Baabda palace sources said.

The president also held a telephone conversation with caretaker Justice Minister Ibrahim Najjar. He inquired him whether it is possible for the public prosecutor’s office to deal with the incident at the telecom ministry building.

Why not just relieve Rifi of his duties? is he unsackable?

I hope that rifi doesn't follow the presidents orders. The president, and Minister Barod seam to be unable to understand what Nahas is doing!

Ado, are you serious about relieving rifi from his duties? Mustaqbal party thinks they rule the country and are above the law. Lebanon will be like this as long as the Hariri gangsters are in power...

Sanctify Yourself (Guest) over 9 years

It's clear that Hezbollah is not the sole militia that needs to be disarmed. It's unbelievable how much damage Nasrallah and Hariri Co are inflicting to this country every day.

The Public Prosecution should investigate the whole case and charge whoever is found breaking the law. A special court should decide on the findings.

The President and Baroud are only strong against M14 but they dare do NOTHING against Hizb and M8... they are tough on unarmed people but cowards when i comes to M8. What a double standards!!! we are all equal under the law. I dare the President and Baroud to publicly question Nahhas or any of the M8 gangs. God bless and protect General Refi who stood up to the criminals.

I really hope Rifi is sacked although clearly this will never happen. Fact, the third GSM network is illegal, if it is not dismantled I might just as well set up my own network and tap into the lucrative returns...I think alpha and mtc touch are making USD100million each a month and thats after paying 90% of their income to the state. Rifi has lost all his credibility, why is he stoping the dismantling of an illegally set up network and thus acting against the interest of the state?