March 8: Suleiman Should End Rifi’s ‘Rebellion’ in his Role as Commander-in-Chief 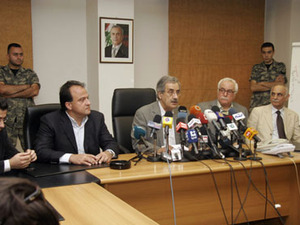 The March 8 forces said that as commander-in-chief of the armed forces, President Michel Suleiman should resolve the Telecommunications Ministry crisis and force all security forces to abide by his decisions.

A high-ranking March 8 source told As Safir daily in remarks published Friday that amid a caretaking cabinet and Interior Minister Ziad Baroud’s decision to absolve himself from his duties, the responsibility of Suleiman lies in addressing the issue as all security forces become his subordinates.

“It is no longer acceptable for a director-general to continue his rebellion on the entire state by seeking protection from his political-confessional authority,” the source said about Internal Security Forces chief Maj. Gen. Ashraf Rifi who prevented Caretaker Telecom Minister Charbel Nahhas from entering a facility affiliated with the Telecommunications Ministry in Beirut’s al-Adliyeh area on Thursday.

Rifi is a Sunni with close ties to Caretaker Premier Saad Hariri, who is also the leader of al-Mustaqbal movement. As for Nahhas, he is pro Free Patriotic Movement leader Michel Aoun.

The source expected Speaker Nabih Berri and Aoun’s Change and Reform bloc to make stances on the incident on Friday.

M8 must FIRST disarm it's militias such as Hiz, Amal, etc...

How dare the M8 idiots to request a ligitimate Lebanese entity to leave.
God bless and protect you General Refi.

M8 go to IRANNNNNN or Hell, your choice...