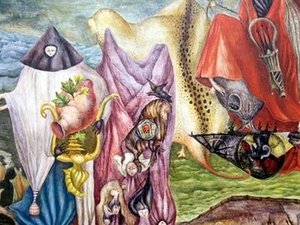 British-born painter, writer and sculptor Leonora Carrington, considered one of the last of the original surrealists, has died, Mexico's National Arts Council confirmed Thursday. She was 94.

Carrington was known for her haunting, dreamlike works that often focused on strange ritual-like scenes with birds, cats, unicorn-like creatures and other animals as onlookers or seeming participants.

Once the lover of German artist Max Ernst, Carrington was also part of a famous wave of artistic and political emigres who arrived in Mexico in the 1930s and '40s. In the male-dominated realm of surrealism, she was a member of a rare trio of Mexico-based female surrealists along with Frida Kahlo and Remedios Varo.

"She was the last great living surrealist," said longtime friend and poet Homero Aridjis. "She was a living legend."

Friend and promoter Dr. Isaac Masri said she died Wednesday of old age, after being hospitalized. "She had a great life, and a dignified death, as well, without suffering," he said.

"She created mythical worlds in which magical beings and animals occupy the main stage, in which cobras merge with goats and blind crows become trees," the National Arts Council wrote, adding, "These were some of the images that sprang from a mind obsessed with portraying a reality that transcends what can be seen."

She wrote magazine and newspaper articles, novels, essays and poems and made thousands of paintings, sculptures, collages and tapestries that were exhibited in Mexico City, New York, Los Angeles, London, Paris, Tokyo and many other artistic centers.

Mexican author Elena Poniatowska was a longti 1/4me friend of the artist and wrote the novel "Leonora" based on her life.

"Leonora was truly a woman who was one of a kind," Poniatowska said.

Carrington was born in Clayton Green, Lancashire, England, on April 6, 1917, and came to Mexico during World War II. For many years she divided her time between Mexico City, New York and Chicago, but her last longtime home and inspiration was Mexico, once famously dubbed a "surrealist country" by writer and poet Andre Breton for its colorful and sometimes grotesque costumes, masks, rituals and dances. That meshed well with the surrealists, whose works were marked by irony, non sequiturs, strange juxtapositions and fantasy.

University of Manchester teaching fellow Joanna Pawlik, who works with the Center for the Study of Surrealism, noted that Carrington joined the surrealists in the 1930s, well after the group published its first manifesto in 1924. Pawlik noted that at least one other artist who worked with the surrealists, U.S. artist Dorothea Tanning, is still alive.

Born to a wealthy family, Carrington was the second of four children of an English textile-maker and an Irish mother who painted small murals as a hobby.

When she was 9, Leonora became so rebellious the family sent her to religious schools, where she was expelled for misbehavior.

Later they sent her to a boarding school in Florence, Italy, and then to a private school for young ladies in Paris. She was miserable in both.

In the mid-1930s, she lived with Ernst in Paris, where she became friends with Breton, the Spanish painter Pablo Picasso, and other members of the surrealist inner circle. She held her first surrealist painting exhibits in 1938 in both Paris and Amsterdam.

War broke out with Nazi Germany and in 1939, Ernst was imprisoned at a concentration camp in Largentiere as an enemy alien by the French authorities.

The following year, Carrington fled to Spain. She caused a scandal at the British Embassy in Madrid, loudly threatening to plot to kill Adolph Hitler, and was committed to an insane asylum in Santander, from which she eventually escaped and made her way to Lisbon.

Carrington was saved by writer Renato Leduc, whom she had met during her Paris days when he was working as a Mexican consulate official. They married — apparently to get Carrington out of Europe — and went to New York and later to Mexico City.

She became a Mexican citizen; she and Leduc divorced, and she married her second husband, the Hungarian-born writer-photographer Emerico "Chiki" Weisz, in 1946. They had two children, one of whom, Pablo, eventually became a painter in his own right.

In Mexico, she befriended the poet and Nobel laureate Octavio Paz, Frida Kahlo and her husband, the irascible muralist Diego Rivera, the late Spanish movie producer-director Luis Bunuel and many others.

Carrington took her two sons and left Mexico in 1968 in protest against the army's Oct. 2 massacre of demonstrating university students, but returned a year later.

In 1971, she went to Canada and Scotland to study Buddhism under a Tibetan monk in exile, then came back to Mexico City. She left again for New York after two earthquakes devastated the city in September 1985, and three years later moved to Chicago.

She returned to Mexico a couple of years after that.

The artist is survived by two sons, Gabriel and Pablo. Her body was taken to a Mexico City funeral home for viewing, and she was buried Thursday at the city's British cemetery.