US Increases Access to Microfinance for Lebanese Micro and Small Businesses 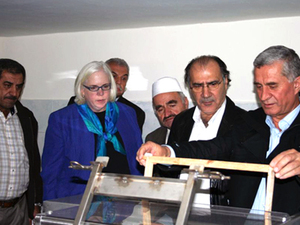 U.S. Ambassador Maura Connelly attended the commencement of the second phase of the Lebanon Investment in Microfinance (LIM) on Thursday.

A $12 million U.S. funded program, LIM provides loans to small businesses, farmers and others so that they can grow their own businesses and create jobs.

The first phase of the program was launched in May 2009, and the second phase is expected to last until April 2015, according to a statement released by the U.S. Embassy.

Through second phase investment in LIM, USAID will help local partners already providing loans to increase their capital and capacity to make loans. These loans are available to small businesses and farmers working throughout Lebanon in sectors such as agribusiness, tourism, and information and communication technology.

In the first phase, $1.05 million was made available by USAID, and provided loans to over 2200 small businesses, creating 3000 jobs, a third of which are filled by women.

Through loan repayments, this amount has increased to $3.5 million and is still being used to fund microloans. USAID is also working with local partners to develop new loan products and to go further in rural and semi-urban areas. Those interested in applying for loans can consult the individual local partners or contact the LIM program at 01-990234 or 239.