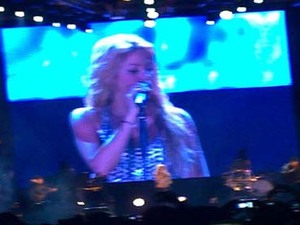 Streets in downtown Beirut were packed by fans hours before the concert, which started at 9:30 pm. Organizers estimated that 20,000 people attended the event.

At one point, crowds cheered as Shakira, who is of Lebanese origin, shook her famous hips at an Arabic soundtrack.

The Grammy award winner and songwriter fascinated fans for two hours by singing a series of her best known songs and finally the famous “Waka Waka” which was the official song for the 2010 FIFA World Cup.

"I love you very much Lebanon and I hope to see you dancing and singing with me. It's gonna be a party," said the “Hips Don’t Lie” singer upon her arrival to Beirut.

Shakira pushed talk show host Oprah out of tenth place on Twitter's list of most followed microbloggers during the week ending May 23.

The pop singer has been accruing hoards of fans on Twitter, sharing photos and posting a teaser for her latest music video "Rabiosa," in which she forgoes her usual bleached blonde locks in favor of a dark brown bob and a tight minidress.

to not a fan...if u are not a fan..then why did u attend? just outa curiosity! a bit ironic..don't u think?

well it seems that the 14 of March will say a million came to see Shakira,
8 of march would argue there were 10 K

At least it wasn't Hezbollah Al Shaitan on stage, Lebanese are just like their ancestors the Phoenicians good in any thing their hands reach too.