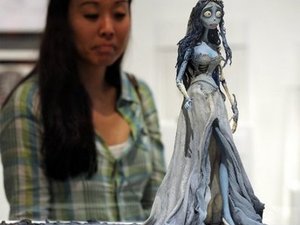 Tim Burton's arresting visual style is well known from movies like "Charlie and the Chocolate Factory" and "Alice in Wonderland" -- but a new show reveals the full scale of his Gothic vision.

The U.S. filmmaker, partner of quirky British actress Helena Bonham-Carter, was an accomplished artist, and a Disney animator, before moving into directing Hollywood movies.

"This exhibition shows the full range of Tim Burton's extraordinary creativity," said Britt Salvesen, the exhibition's organizer at the Los Angeles County Museum of Art (LACMA), which is presenting the show from May 29 to October 31.

"Most people have a good sense of his style, but seeing the show demonstrates how persistent his vision is and how evident it was from very early on, before he was even thinking about making full-scale feature films."

LACMA said the film retrospective -- titled "The Fantastical Worlds of Tim Burton" -- will consist of 15 movies running at the center's Bing Theater between May 27 to June 28.

Doris C. Adams, one of Burton's art teachers when he was young, said: "He drew everything you can ever imagine, and all those little creatures," adding that she "always encouraged him to go ahead ...because he was very talented."