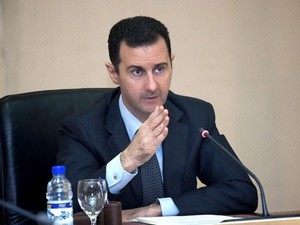 Assad made his call during a first meeting with his government after a reshuffle of five ministerial posts on Saturday.

During the meeting, the president also lashed out at "groups that target Syria" in the nearly two-year war that has ravaged the country, SANA said.

Assad's regime has systematically blamed "terrorists" and foreign powers for the nearly two-year war in Syria that the U.N. says has left at least 60,000 people dead.

"The situation Syria faces today has raised higher expectations among citizens from the government. This has created new responsibilities for ministries and other state institutions," Assad said.

Syrians must "also bear responsibility and give help... while contributing to collective action among state institutions and citizens, in order to ease the effects of the crisis," Assad added.

The president meanwhile said "groups that target Syria... are trying to ruin the Syrians' minds, and that is why civilians are being targeted left, right and center".

Syria's economic crisis has skyrocketed since the outbreak of an anti-Assad revolt in March 2011. Inflation is spiraling, and there is a severe, countrywide shortage of bread, fuel and other basic goods.