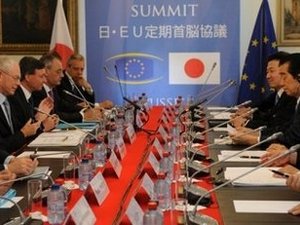 The European Union and Japan said Saturday they had agreed to work towards a multi-billion-euro free trade deal linking the world's third biggest economy to the globe's largest market.

A statement issued after a Japan-EU summit said leaders "agreed to start the process" for "negotiations for a deep and comprehensive Free Trade Agreement (FTA)/Economic Partnership Agreement (EPA), addressing all issues of shared interest to both sides.”

To this end, the two sides would begin talks "as soon as possible" aimed at "defining the scope and level of ambition" at stake, the joint statement said.

Concretely, this means Tokyo and Brussels will have to hammer out a list of problems to address and goals to achieve before the 27-member EU gives its official go-ahead to the launch of FTA negotiations.

To speed up the kick-off of FTA negotiations proper, the EU executive, the European Commission, will immediately begin a process to authorize the talks "on the basis of a successful scoping,” the statement added.

Japan had long pressed the EU to use the Saturday summit as the stage to announce a formal launch of FTA talks but Europe reneged, demanding more assurances of a level playing field before taking that path.

The EU's trade deficit with Japan, its sixth trading partner, has narrowed over the last decade from 47 billion euros in 2000 to 21 billion in 2010.

The EU's signature of an FTA with Asian rival South Korea last year has upped Tokyo's insistence on a deal to offset fears that Japan's famed electronic appliances and automobiles may lose a competitive edge.

Britain's Foreign Secretary William Hague this month touted the prospects of a golden pot. The removal of tariff and non-tariff barriers could deliver over 40 billion euros ($60 billion) of additional European exports to Japan, and more than 50 billion euros of extra exports from Japan to the EU, he said.