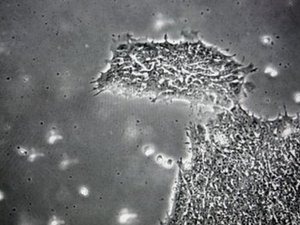 Scientists have shown for the first time that it may be possible to replace a human hip or knee with a joint grown naturally inside the body using the patient's stem cells.

In experiments on rabbits, the researchers coaxed the animals' stem cells to rebuild the bone and cartilage of a missing leg joint, according to a study published on Thursday.

"This is the first time an entire joint surface was regenerated with return of functions including weight bearing and locomotion," lead researcher Jeremy Mao, a professor at Columbia University Medical Center, said in a statement.

Naturally-grown joints would likely last longer than the current generation of artificial mechanisms, he said.

With ageing populations and many people under 65 requiring replacement surgery, there is a real danger patients will outlive metallic joints and require a second grueling operation late in life.

In the experiments, Mao and colleagues removed the forelimb thigh joint of 10 rabbits, and then implanted a kind of scaffolding made of biologically compatible materials.

A naturally-occurring substance that stimulates cell growth then cued the rabbits' stemcells to go to the site of the missing joint and regenerate both cartilage and bone in two distinct layers.

Within four weeks, the animals resumed normal movements -- a medical first, the researchers reported in the British medical journal The Lancet.

The fact that the regenerated limb joint was created from the stemcells in the host animal -- rather than being harvested and then cultivated outside the body -- is also unprecedented, they said.

This new procedure "may ultimately lead to clinical applications," said Mao. "In patients who need the knee, shoulder, hip or finger joints regenerated, the rabbit model provides a proof of principle."

But a number of scientific and regulatory issues remain before the procedure can be tested on humans, he said.

For hip replacements, for example, recovery in people will be more difficult because humans carry all their weight on two legs.

Many patients are also likely to have existing conditions and drug regimens that could adversely affect the growth of new joints.

Some patients -- especially elderly people with diabetes -- will not have the same capacity for natural regeneration, cautioned Patrick Warnke of Australia's Bond University in a commentary, also in The Lancet.(AFP)