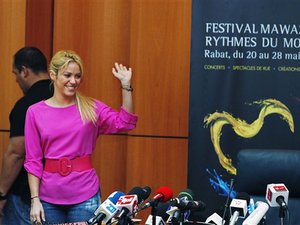 Colombian pop singer Shakira said Saturday she would one day like to sing pop songs, if not an entire album, in Arabic.

The native Spanish speaker, who also has global hits in English, was speaking at a news conference in Morocco, where she was headlining the Mawazine World Rhythms music festival.

"It would be a challenge to do an album in Arabic. I would first have to learn Arabic," she said. "I am completely open to that experience. ... At some point I would love that to happen in my life."

Born in Colombia of Lebanese origin, Shakira said she grew up listening to the Arab world's premier divas of the 20th century, Egyptian Umm Kalthum and Lebanese Fairouz.

Shakira often uses eastern dance, also known as belly dancing, in her acts, and her hit Spanish language single "Ojas Asi" relies heavily on a Middle Eastern melody. Her eastern origins and musical influences have made her popular throughout the Middle East.

She admitted, however, that she only speaks a few words of Arabic, including "ateeni boosa" or give me a kiss, provoking laughter among the mostly Moroccan crowd of journalists.

Let her come to me! I would teach her the best of Arabic!!!