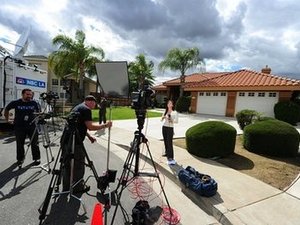 The ex-husband of Arnold Schwarzenegger's lover told a Colombian magazine Sunday that he plans to sue the former governor, alleging that the birth certificate of the couple's love child was falsified.

Rogelio Baena, a Colombian native, was married to Mildred Patricia Baena, who was a housekeeper to the Hollywood star-turned California governor and his celebrity wife Maria Shriver.

Rogelio Baena only recently learned that his 13 year-old son with Mildred Baena was actually the love child of Schwarzenegger and his ex-wife.

Yet Rogelio Baena's name appears on the birth certificate as the boy's father, and attorneys have told him that if Schwarzenegger and Mildred Baena knew this was not true, they engaged in conspiracy to falsify a public document -- a serious crime in California.

Rogelio Baena separated from his then-wife after 10 years of marriage in October 1997, just weeks after the boy was born. The couple however did not file for divorce until February 2008, according to U.S. entertainment media.

Mildred Baena, now 50, worked in Schwarzenegger-Shriver household for 20 years. The California power couple has four children between the ages of 14 and 21, and their youngest son was reportedly born just days before the Schwarzenegger-Mildred Baena love child was born.

Schwarzenegger, 63, announced his separation from Shriver after 25 years of marriage on May 10, and soon after revealed that the split occurred after he told her about the love child he had fathered and kept secret.

Schwarzenegger has put his movie comeback plans on hold to handle the family crisis sparked by his admission.

He told his agents that work on new projects including "The Terminator" franchise would stop "until further notice" as he grapples with a media storm four months after leaving political office.

Shriver, a daughter of the Kennedy political dynasty, has hired a top divorce lawyer, Laura Wasser, according to People magazine.

Pictures of Mildred Baena and her son with Schwarzenegger -- who bears a striking resemblance to Arnie -- have circulated online since the actor admitted to the love child, and apologized to his family.