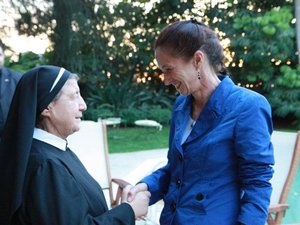 The British embassy has raised funds totaling $18,000 for two Lebanese non-governmental organizations during its ‘Royal Wedding Gala charity Lunch’ hosted on April 29, the embassy said in a statement Monday.

To present these funds, British Ambassador Frances Guy hosted a reception at her residence, in the presence of representatives of the two charities, and the event sponsors, the statement said.

The NGOs are SOS Children’s Village and Father Robert Institute for the Young Deaf.

Guy “was delighted to announce that the objective of the event in Lebanon has been met and was able to raise the sum of 11,000 pounds ($18,000) for both charities,” the embassy said.