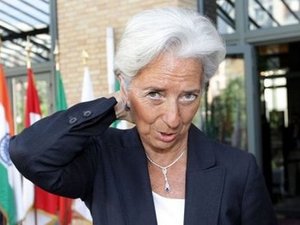 EU capitals now consider the appointment of French Finance Minister Christine Lagarde as the next head of the IMF is a done deal, after U.S. Secretary of State Hillary Clinton hailed her candidacy, a European official told Agence France Presse at the G8 summit.

"Lagarde? It's done," the senior source told AFP, speaking on condition of anonymity as the decision depends on the IMF and not on EU or G8 leaders.

British Prime Minister David Cameron said he had witnessed "very strong support for her candidature in a range of different conversations that I've had" at the Deauville summit.

"The one thing everybody says is that she is clearly a very strong candidate, she has what it takes in terms of political leadership experience and respect as a finance minister, not just in Europe but more widely," he told reporters.

Lagarde, a 55-year-old former lawyer, is planning a visit to India as part of her campaign to become the next IMF chief, her French cabinet colleague Gerard Longuet, the defense minister, said Friday.

"There is a sign of the importance of India for France: Christine Lagarde will begin her campaign for the IMF in India," Longuet told reporters in New Delhi.

Europe has traditionally provided the managing director of the International Monetary Fund, and the major EU governments have rallied around Lagarde's bid for the job following the arrest of the former chief Dominique Strauss-Kahn on sex assault charges.

Emerging nations have challenged Europe's automatic right to the post, but have failed to rally around a candidate.

De Villepin made her France's trade minister, and she later took over the agriculture portfolio.

On Thursday, Clinton said that although the United States had not adopted an official position, she personally welcomed Lagarde's candidacy.

"I am a strong supporter of qualified women, which she is certainly one, being given the opportunity to lead international organizations," she said, referring to Lagarde. "I actually know her. I admire her."

While Washington has also said that Agustin Carstens, the governor of Mexico's central bank, is a "credible candidate", the EU official said diplomats at the G8 summit in Deauville had interpreted Clinton's remarks as a victory for Lagarde.

A senior White House official said that French President Nicolas Sarkozy had discussed the candidacy by Lagarde with U.S. President Barack Obama, but said Obama had given no undertaking to support her.

"We support the IMF process that they announced last weekend, which has a deadline of I think June 30th or so, and are confident that it will produce a good candidate," he said.

"The president, similar to what I said, restated our position that the IMF has announced a process and it's important to go through that process."

I am a strong supporter of a qualified woman...