Without Driver or Map, Vans Go from Italy to China 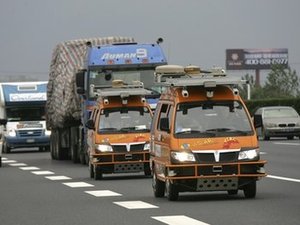 Across Eastern Europe, Russia, Kazakhstan and the Gobi Desert — it certainly was a long way to go without getting lost.

Four driverless electric vans successfully ended a 13,000-kilometer test drive from Italy to China — a modern-day version of Marco Polo's journey around the world — with their arrival at the Shanghai Expo on Thursday.

The vehicles, equipped with four solar-powered laser scanners and seven video cameras that work together to detect and avoid obstacles, are part of an experiment aimed at improving road safety and advancing automotive technology.

The sensors on the vehicles enabled them to navigate through wide extremes in road, traffic and weather conditions, while collecting data to be analyzed for further research, in a study sponsored by the European Research Council.

"We didn't know the route, I mean what the roads would have been and if we would have found nice roads, traffic, lots of traffic, medium traffic, crazy drivers or regular drivers, so we encountered the lot," said Isabella Fredriga, a research engineer for the project.

Though the vans were driverless and mapless, they did carry researchers as passengers just in case of emergencies. The experimenters did have to intervene a few times — when the vehicles got snarled in a Moscow traffic jam and to handle toll stations.

The project used no maps, often traveling through remote regions of Siberia and China. At one point, a van stopped to give a hitchhiker a lift.

A computerized artificial vision system dubbed GOLD, for Generic Obstacle and Lane Detector, analyzed the information from the sensors and automatically adjusted the vehicles' speed and direction.

"This steering wheel is controlled by the PC. So the PC sends a command and the steering wheel moves and turns and we can follow the road, follow the curves and avoid obstacles with this," said Alberto Broggi of Vislab at the University of Parma in Italy, the lead researcher for the project.

"The idea here was to travel on a long route, on two different continents, in different states, different weather, different traffic conditions, different infrastructure. Then we can have some huge number of situations to test the system on," he said.

The technology will be used to study ways to complement drivers' abilities. It also could have applications in farming, mining and construction, the researchers said.

The vehicles ran at maximum speeds of 60 kilometers per hour and had to be recharged for eight hours after every two to three hours of driving. At times, it was monotonous and occasionally nerve-racking, inevitably due to human error, Fredriga said.

"There were a few scary moments. Like when the following vehicle bumped into the leading one and that was just because we forgot, we stopped and we forgot to turn the system off," Fredriga said.(AP)

Whoa, whoa, get out the way with that good informaotin.