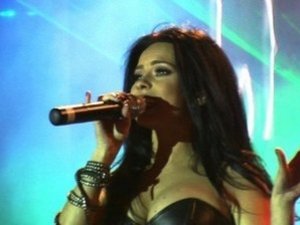 Like dancing and looking for new club music? Move over London and Ibiza, it's time to check out .... Romania.

Artists from this eastern European state have inched their way onto the international scene to beat out Lady Gaga for a big U.S. dance song award, score millions of views on YouTube and sell hundreds of thousands of singles.

Among the best known are Edward Maya and Inna, now worldwide dance floor stars -- and the pride and joy of this former communist country stuck in an economic crisis and still fighting a reputation abroad as corrupt and poor.

"Romanian dance music is very successful around the world at the moment with big hits in Europe and the U.S.," Eelko van Kooten, director of one of the major dance labels, Dutch-based Spinnin'Records, told Agence France Presse.

In May, the 24-year-old Maya -- real name Eduard Marian Ilie -- won the American Billboard Award for "top dance song" of the year for "Stereo Love", no small feat for an artist who only caught the public's eye in 2009 and was competing in a line-up that included megastar Lady Gaga.

The dark-eyed performer sports his trendy stubble as easily as his accordion, more folk than house music instrument but one he readily uses for a new mix that caught attention. Since the 2009 release of "Stereo Love", the Bucharest-born composer has won gold and platinum albums from Canada to Spain and toured clubs as far away as India and Pakistan.

Maya's compatriot Inna -- real name Alexandra Apostoleanu -- made her own quick rise to the top and can boast sales of nearly two million singles worldwide, notably in the United States and Britain.

The 24-year-old brunette has had more than 100 million views on YouTube for her hits like "Amazing", "Sun is Up" or "Hot" and more than two million fans on Facebook from Australia to South America.

"I would never have imagined such a success!" she told AFP after shooting a video clip in a Bucharest factory. "I now see other Romanian dance artists in concerts around the world."

For Inna, a "special vibration" unites the new generation of dance music artists in Romania. All in their twenties, they grew up after the fall of communism and "really want to make party music, something that gets people on the dance floor," she said.

But what explains their international success?

Some say it's the "glamour", video clips that show the leggy Inna, Alexandra Stan and other Romanian artists in breathtaking seaside settings with dancers straight out of glossy fashion magazines. But this is nothing new in pop music.

Industry figures, instead, point to a basement studio in a house in a leafy residential district of the capital. There, a determined 20-something trio called Play & Win mix sound for hours on end in a room with a piano, a large table and some powerful computers.

The three, Radu Bolfea, Marcel Botezan and Sebastian Barac, all born in the mountains of Transylvania, are credited with creating a "Romanian" sound that has turned out some of the country's biggest dance music hits, by Inna and others.

"Club music did not really have melody so we tried to introduce more melodic lines in it," they said modestly.

For Terry, the artistic director -- who goes by one name -- at the famous Loft Metropolis club near Paris where Inna and Alexandra Stan have played live, the Romanians have come up with a sound that's "very efficient and dedicated to the dance floor", even if it's "nothing extraordinary".

Spinnin'Records' Van Kooten calls it friendly. "Romanian dance music has its own sound: simple melodies, catching course lines," he said. "It's easy to sing along and very radio friendly with a mid tempo."

At the moment "it's the trend," he added. "But like fashion, trends go fast."

Play & Win also site Internet's role in promoting Romanian dance music. "It's a real test because people truly say what they think about your music, and you can get worldwide," they said.

Neither they nor singers or managers were keen to talk about how much they make from dance music. "We can live well from what we do," Play & Win said.

But they don't hide their delight at success. "Yes, sometimes we are proud that from here, a country sometimes described as Third World, we are trend setters in Europe and in the US", Play & Win said.