Feltman Worried Syrian War Would Pull Lebanon to its 'Vortex,' Calls for Consensus on Vote Law 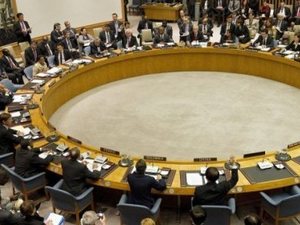 U.N. Under-Secretary-General for Political Affairs Jeffrey Feltman has warned that Syria's war would pull Lebanon into its “vortex” and encouraged Lebanese officials to ensure that the parliamentary elections take place on a consensual basis.

"Even tentative steps to dialogue are struggling to take root. The destructive military spiral churns more forcefully each day and threatens to pull its neighbors, most notably and worrisomely Lebanon, into its vortex," Feltman told the U.N. Security Council about the fighting between the troops of Syrian President Bashar Assad and rebels seeking to topple him.

"Regrettably, the warring parties remain locked in a military logic which is bound to bring more death and destruction."

Additionally, he said: “We are concerned at any actions that risk drawing Lebanon into the conflict in Syria.”

Moreover, reports of arms transfers to and through Lebanon were contrary to international obligations, he said, calling on all sides to respect Lebanon’s border integrity and sovereignty, and on all Lebanese parties to honor the Baabda Declaration of June 2012.

In the declaration, Lebanon's rival parties agreed to keep Lebanon away from the policies of regional and international conflicts.

Feltman encouraged work to continue to ensure that the polls took place on a consensual basis within the legal and constitutional context after informing the members of the Security Council that a draft-law for the parliamentary elections in June still eluded consensus.

The diplomat also informed Council members about the Feb. 20 indictments by the Lebanese military court of Syrian General Ali Mamlouk and former Lebanese Minister Michel Samaha for their alleged involvement in a terrorist plot in the country.

On the Special Tribunal for Lebanon, Feltman said that the court postponed on Feb. 1 the start of the in absentia trial of four Hizbullah members provisionally scheduled for March 25.

He added that the eighth anniversary of the assassination of former Prime Minister Rafik Hariri on Feb. 14 underlined the need to achieve justice for past assassinations and attempted ones.

I'm sure Feltman is so 'worried' that he's 'shakin in his boots.
Not.