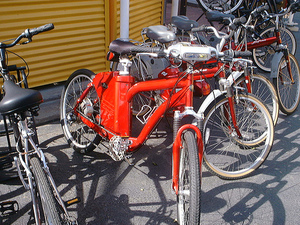 China will phase out battery-powered electric bikes that exceed national speed and weight restrictions -- even as Beijing seeks to reduce pollution and ease chronic traffic jams in major cities.

The agencies, including the Ministry of Industry and Information Technology, did not specify a deadline for the ban on substandard electric bikes popular in major cities where traffic congestion is a huge headache for commuters.

China is estimated to have more than 120 million electric bikes on its roads, 90 percent of which exceed the national restrictions published 12 years ago, the 21st Century Business Herald said Wednesday.

Manufacturers that fail to meet the standard will have their operations suspended to adjust production or have their business licenses revoked after an unspecified deadline, the statement said.

Local authorities will be asked to hand out subsidies to owners of substandard electric bikes so they can buy a new one, it said.

It is not clear how the rules will affect manufacturers of lead acid batteries, which are used in most electric bikes in China due to their low cost.

The government has targeted the lead acid battery industry as part of a crackdown on heavy metal pollution in the country, after dozens of lead poisoning scandals in recent years.