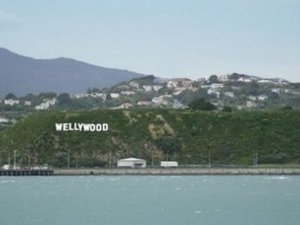 Wellington Airport on Wednesday said it had put plans for a giant "Wellywood" sign on hold amid a public backlash against the idea in the New Zealand capital.

The eight-meter-high (26-foot-high) sign across a hillside owned by the airport was designed as a Hollywood-style tribute to Wellington's film industry, which has created blockbusters such as "The Lord of the Rings".

But the plan generated a storm of protest when it was announced last month, with critics labeling the sign a derivative "try-hard" copy of the original.

More than 26,000 people joined a Facebook page opposed to the sign, the city council passed a resolution condemning it and even Prime Minister John Key said he thought the airport had got it wrong.

In response, the airport said Wednesday that work on the "Wellywood" letters had been stopped and it would form a community consultation panel to look at alternatives.

"We have listened to community views," airport chief executive Steve Fitzgerald said in a statement.

"We are inextricably linked to the Wellington economy and community and we always strive to act in the best interests of Wellington."

Fitzgerald said a sign of some description would be erected on the hillside but it would not go ahead before the panel had considered all options, which would still include the "Wellywood" lettering.

The Hollywood Chamber of Commerce, which has trademark rights on the original sign in Los Angeles, had also threatened legal action over the New Zealand version.

The US sign was erected in 1923 to advertise a property development called Hollywoodland and the last four letters were removed in the 1940s.