U.S. Calls for Sudan Leaders to Meet on Abyei 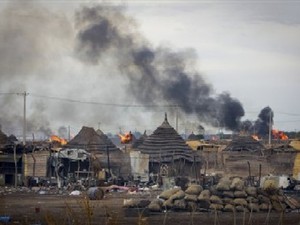 The United States called Wednesday on Sudan's northern and southern leaders to meet immediately to defuse a crisis over the disputed Abyei border region and help save a 2005 peace agreement.

Johnnie Carson, the top U.S. diplomat for Africa, renewed U.S. condemnation of the May 21 seizure of Abyei by troops serving the northern-based government of President Omar al-Bashir and repeated American calls for them to withdraw.

He said Brennan went to Khartoum "primarily" to discuss efforts to remove Sudan's government from the State Sponsors of Terrorism blacklist -- efforts which U.S. envoy Princeton Lyman says have been jeopardized by Abyei's seizure.

Sudan was designated as a state sponsor of terror in 1993 because of its alleged links to international violent extremist groups.

Countries on the blacklist are not eligible for American aid or for U.S. arms purchases, and bilateral trade is restricted.

The diplomatic push comes amid fears that the crisis over Abyei, which straddles the border of northern and southern Sudan, could wreck the 2005 Comprehensive Peace Agreement (CPA) that ended 22 years of civil war.

Abyei's fate is the most sensitive of a raft of issues on which Khartoum and Juba, the southern region's capital, have been struggling to reach agreement before the south's full independence in July following a referendum in January.

"The actions being taken by the government of Sudan are blatant violations of the Comprehensive Peace Agreement of January 2005," Carson told reporters in Washington.

"And they threaten to undermine the mutual commitment of the CPA parties to avoid returning to war," he warned.

"We call on President Bashir and First Vice President (Salva) Kiir to meet immediately and to agree on the way forward that restores calm, upholds the CPA and recommits both sides to negotiate a political settlement on the future of Abyei."

Asked if Brennan delivered the same message during his talks with northern officials in Khartoum, Carson replied: "The message is uniform throughout the administration."

"Mr Brennan underscored President Obama's deep concern over the continued presence of Sudanese Armed Forces in Abyei and urged a rapid and peaceful resolution to the crisis and to resolving outstanding CPA issues," it said.

Khartoum on Tuesday unveiled new proposals to resolve the crisis in the Abyei region, including a rotating administration to govern the disputed region and the northern army staying on until a referendum.

Northern troops and tanks overran the bitterly contested region on May 21, ostensibly in response to an attack two days earlier on a U.N.-escorted army convoy in northern Abyei, in which at least 22 soldiers were killed.

The southern government has demanded the immediate withdrawal of the north's troops, while Bashir insists Abyei is "north Sudanese land."

In a January referendum that marked the centerpiece of the CPA, mainly non-Muslim and African southern Sudanese overwhelmingly voted to secede from the Arab and Muslim government in Khartoum.

A parallel referendum was to have taken place in Abyei, but north and south disputed voter eligibility in a border region split between the southern-backed Dinka Ngok people and northern-supported Misseriya Arab cattle herders.

If Bashir and Kiir meet each other, it would amount to the highest level talks since the crisis erupted.

South Sudan's vice president Riek Machar said Monday after talks with his northern counterpart Ali Osman Taha that efforts to persuade Khartoum to withdraw its army from Abyei had failed.