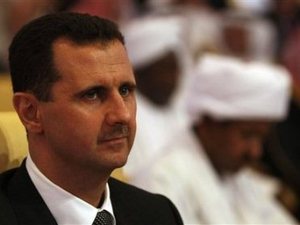 The statement comes after Assad met a Turkish opposition delegation.

Assad told the Republican People's Party delegation there was "a need to distinguish between the stance of the Turkish people, who support stability in Syria, and the positions of Erdogan's government, which supports terrorism, extremism and destabilization in the region," it said.

"The Syrian people appreciates the position adopted by forces and parties in Turkey that reject the Erdogan government's negative impact on our societies, which are multi-religious and multi-ethnic," Assad said.

The Turkish delegation, headed by Hassan Akgul, stressed "the Turkish people's refusal to interfere in Syrian affairs, and a commitment to good neighborly relations," the statement said.

The visitors also "warned of the risks of the Syrian crisis's impact on Turkey and other countries in the region," it added.

Damascus, meanwhile, called on the international community on Thursday in letters to the United Nations to condemn Ankara's role in the Syrian conflict, which has left some 70,000 people dead.

"Syria hopes that the international community... will fulfill its responsibilities clearly and sincerely, and denounce the role of the Turkish government and other states that fund the al-Qaida-linked terrorist groups, while bearing them responsible for what is happening in Syria," the letters said.

Assad's government has systematically blamed the violence in Syria on a foreign-backed plot, and has frequently accused Turkey of channeling funds and weapons to the armed opposition.

Ankara broke off relations with Damascus soon after the outbreak of Syria's uprising, which morphed into an armed insurgency after the regime unleashed a brutal crackdown against dissent that began in mid-March 2011.

Turkey hosts some 200,000 Syrians who fled the violence, and earlier this month it hosted a Syrian opposition election for Aleppo's provincial council.