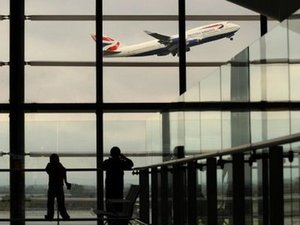 Global air travel is now above its peaks before the global downturn in 2008 but high jet fuel and other crises could hold back the rebound, International Air Transport Association said on Thursday.

"Profits are being squeezed by the succession of crises and shocks that have marked the first four months of this year," said Giovanni Bisignani, IATA's director-general and chief executive officer.

The Geneva-based airline body said in its monthly report that air traffic grew 16.5 percent year on year in April, led by European and Latin American carriers.

However it said the improved figures were "exaggerated" by the disruption in April to European air travel caused by the Iceland volcanic ash cloud.

European carriers led the way in April with a 29.3 percent spike in traffic followed by Latin American where carriers saw a 25.9 percent increase.

In the Asia-Pacific, traffic improved 5.1 percent with help from strong travel demand in China and India.

But the March 11 earthquake-tsunami and resulting nuclear crisis in Japan crimped those gains as passengers refused to travel to the usually-popular destination.

It also said violence in the Middle East and North Africa had an impact on travel as Tunisia and Egypt -- popular with tourists -- saw revolutions while several other nations in the region suffered unrest.

"Eliminating all distortions, we are growing at 3-4 percent. International air traffic is now seven percent above the early 2008 pre-recession levels," Bisignani said in a statement released in Singapore.

"Maintaining the high load factors needed to support profitable growth will be difficult given the ongoing challenge of matching capacity to volatile demand."