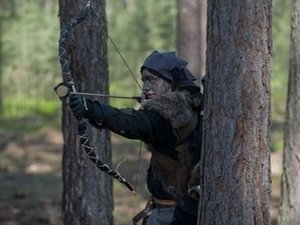 A black-clad goblin lets out a piercing roar and two lines of fighters pour into a shallow ravine, thrusting spears and waving axes.

It looks violent but take a closer look and the axe-blades are made of carpet and the spears and arrows have soft tips.

In fact, the clash is a re-enactment of the Battle of Five Armies, the climax of J.R.R. Tolkien's fantasy novel The Hobbit.

The battle pits men, elves and dwarves against goblins and wargs -- evil, wolf-like creatures. It has become an annual tradition staged each spring on a lakeside in the north of the country.

"We have 805 people here now," said Vojtech Ovecka, a 30-year-old sales manager dressed as Gandalf, the wizard from Tolkien's books, as the armies gather to the astonished looks of bikers passing by.

Over the twelve years since it started as a game for boy scouts, the course of the battle has diverged from the action detailed in The Hobbit -- a prequel to the Lord of the Rings saga.

But few fans care as they walk to the battlefield in a pine forest.

"It's the atmosphere that I look for in these battles, when I see people in fantasy costumes playing their roles," says Lukas Kopecky aka Alweron, the head organizer of this year's battle.

"And then of course the fight. For me, it's a physical activity that I enjoy," adds the 22-year-old university student from Prague.

In the romantic countryside near the ruins of a castle about 100 kilometers (60 miles) north of Prague, the participants fight for the treasure of the Dragon Smaug.

Before the first battle, the goblins gather in the forest, the young ones listening to their generals roaring orders in all dialects of the country, peppered with curses.

"It's not about letting aggression out," says Orfea, a female goblin wearing a cap adorned with long feathers, her face painted black to blend in with her roguish, fierce-looking kin.

"The main thing is to play and to let adrenalin rush," she adds before introducing herself as 21-year-old Zuzana Jedlickova from a village in the eastern Czech Republic.

As the battle unfurls, scores of those stabbed by the soft points play dead by putting their hands on their heads or lying on the ground.

"I got hit by two arrows," grumbles a "dead" warrior taking an obligatory 20-minute pause that will bring him back to life.

There are also real injuries, however. A young elf with long, pointed ears has blood flowing from his lip while a warrior of no more than sixteen is driven away by ambulance, his forearm in a splint.

"This happens. There are more injuries when it's hot -- three years ago, the ambulance kept coming and going with concussions, broken heads and fingers," said Alweron.

"But I'd say nobody comes here to give somebody a trashing," he added.

Elsewhere in the forest, an army of dwarves faces a group of humans, waiting patiently until a young dwarf dashes out to make faces at the enemy.

Suddenly he trips over a branch and falls, to the glee of the rivals who send a man ahead to kill the insolent with a foam spear.

But the dwarf leaps up, skilful with his axe, fending off the spear, then killing the enemy with the carpet blade to cheers from his bearded comrades: the vanquished human meekly puts his hand on his head.

"It's up to the players to settle disputes. If they can't, we have veteran fighters and finally the organizers to decide," says Alweron.

Tired players gather for the final battle on a meadow by their camp.

But he concedes: " It's not quite a mainstream activity. A bit of an underground thing rather."