Assad 'Will Fight to the End' despite Setbacks 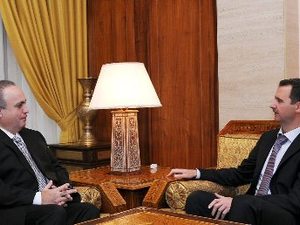 Syria's President Bashar Assad comes across as a remorseless autocrat ready to go to any lengths to stay in power, despite military setbacks and growing ever more isolated from much of the world, observers found.

"He appears relaxed and confident, and certainly doesn't give the impression of being about to quit," said Hala Jaber, a Sunday Times reporter who recently interviewed Assad.

An eye doctor by training, Assad became his father Hafez's heir only after his older brother Bassel died in a car accident.

He became president in 2002 and has made it clear that he will not leave power before his mandate ends in 2014.

In rare speeches and interviews, he projects a confident image that is occasionally tarnished by nervous laughter.

Two years into Syria's revolt, Assad's previously shy, clumsy and unspontaneous persona has hardened, his previously reformist, modern image morphing into that of an unpitying chief.

He refused to condemn members of the security forces who savagely tortured children who scrawled anti-regime slogans on their school walls in the southern province of Daraa.

Their imprisonment became the spark that lit Syria's uprising.

While demonstrators called for reform rather than Assad's fall at the start of the revolt, the brutal repression of peaceful protest turned him into a hated man among dissidents, though a section of the population continues to support him.

"Now he is much more the 'boss' than before, though he of course could not do without his military and security supporters," Nikolaos van Dam, a Dutch diplomat and leading expert on Syria, told Agence France Presse.

"He will fight until death if necessary," said van Dam, author of "The struggle for power in Syria."

"There is too much at stake here, not only for him, but for his Alawite followers and the Alawite community as well." The Alawites are an offshoot of Shiite Islam, while the rebels in Syria are mostly Sunni.

"The future may hold a long and ferocious civil war," van Dam added.

Despite the loss of army control over large swathes of territory in northern and eastern Syria, Assad is certain he will emerge victorious from a war that the United Nations estimates has already left more than 70,000 people dead.

"He seems both more erratic and more delusional, still convinced he can win militarily," said Berlin-based Volker Perthes, who heads the German Institute for International and Security Affairs.

Steeped in the "anti-imperialist" ideology of the Baath party which has ruled for 50 years, Assad believes Syria is the target of a foreign conspiracy because his government supports movements fighting Israel, such as Lebanon's Hizbullah.

He also believes that control over Syria's main cities -- chiefly Damascus -- and the west of the country will give him cards to play in any future negotiations led by the United States and Russia.

Assad has the unwavering backing of the leadership of the army and security forces, although they are suffering increasing difficulties in their efforts to parry rebel advances.

"He is sad for Syria because many things he and his father built are being destroyed before his eyes; but he is calm because he knows he cannot be defeated," Wahhab told AFP.

"He hasn't changed. Every day, he does sport, he checks the news on the Internet and reads the reports he receives. Last time I saw him, he was relaxed.

"Of course there are things he can't do for security reasons, such as going to a restaurant or driving his children to school," Wahhab added.

According to Perthes, the Syrian president will not change his stance, despite international talk of dialogue between the regime and the opposition aimed at setting up a transitional government.

"I don't think Assad would negotiate his own departure and future," Perthes said.

But it said "Assad has the unwavering backing of the leadership of the army and security forces, although they are suffering increasing difficulties in their efforts to parry rebel advances."

The Syrian army is mainly Sunni. Y haven't they defected?

Y are the jihadists from different Muslim countries leading the fight against Assad?... While the fsa, who are actually the army defectors, couldn't gain any ground without the jihadists help.

This thing took too long. It's time for a settlement n a way to move forward. Two years later and the army has not abandoned their leader. So it's fair to say Assad has a majority with him, even if it is a slim one.