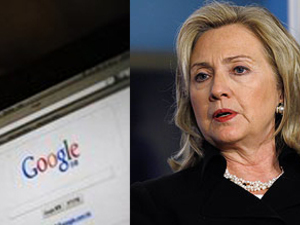 Secretary of State Hillary Clinton said Thursday that the U.S. government is looking into Google's "very serious" allegations of a cyber spying campaign originating in China.

It was serious enough for U.S. President Barack Obama to be kept informed as the White House said "threats to information and communications infrastructure pose a serious economic and national security challenge."

But White House also said that it is not aware that any official email accounts had been compromised.

Clinton said Google informed the State Department on Wednesday about its allegations before going public with them.

"These allegations are very serious. We take them seriously. We are looking into them," Clinton told reporters.

China said Thursday it was "unacceptable" to blame it for a cyber spying campaign which Google said had targeted the Gmail accounts of senior U.S. officials, military personnel, journalists and Chinese activists.

The comments marked the latest salvo in a battle between the Chinese government and Google dating back to last year when the U.S. Internet giant revealed it had been the victim of a separate China-based cyber attack.

Google said Wednesday it was hit by a cyber spying campaign that appeared to have originated in Jinan, capital of the eastern Chinese province of Shandong.

The company did not specifically point the finger of blame at Chinese authorities.

White House spokesman Jay Carney told reporters meanwhile that Obama is "obviously aware" of the Google allegations and "updated on these sorts of things regularly.

"Threats to information and communications infrastructure pose a serious economic and national security challenge for the United States and our partners, which is why the president has made cyber security one of his top priorities," Carney said.

Clinton underlined the point by saying the State Department named Chris Painter as its first-ever cyber security coordinator "because we know this is going to be a continuing problem.

"And therefore we want to be as prepared as possible to deal with these matters when they do come to our attention," she said.

Carney said that, "As with all intrusions, we employ an all-of-government approach with the appropriate agency in the lead. In this case, the FBI is coordinating a response."

Though the government is still studying the reports, Carney said "we have no reason to believe, at this point, that any official U.S. government email accounts were accessed."

Google noted in its warning that personal Gmail accounts were targeted.

Toner said there was no prohibition on State Department officials using private e-mail services such as Gmail for their personal email while they are at work.

"And I think it's important to say that in that training it's stressed that there's no assumption of confidentiality in any kind of personal e-mail account and that you should obviously act accordingly," he said.