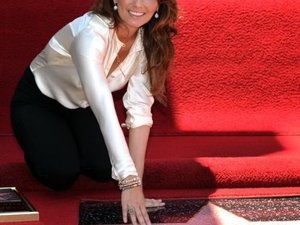 Canadian country pop diva Shania Twain was honored with a star on Hollywood's storied Walk of Fame on Thursday, and voiced surprise that she had come so far.

"I mean, why is a girl from Timmins, Ontario, standing here, getting a star on the Hollywood Walk of Fame?" the Grammy-winner asked. "I really don't know... it's a small miracle, to be honest, that I am here today."

Twain, who just published her memoirs and launched a new TV show, was joined by veteran actress Bo Derek to receive the star, the 2,442nd to grace the sidewalk along Hollywood Boulevard.

Born Eilleen Regina Edwards in Windsor, Ontario, she and her two sisters were adopted by her mother's second husband, Jerry Twain, who legally changed their last names to his.

Twain began singing in bars when she was eight years old to help her family make ends meet. At 13, she performed on the Canadian TV series the "Tommy Hunter Show" and was in several bands before leaving high school.

Her mother and stepfather died in a car crash in 1987, when she returned to her hometown of Timmins to care for her younger siblings, but Twain released a self-titled debut album in 1993 that reached 67th on the US country charts.

Her big break came with her second album "The Woman In Me" in 1995, which went on to sell more than 12 million copies, and won her a Grammy Award in 1996 for best country album.

The Hollywood honor came five months after the 45-year-old tied the knot with Frederic Thiebaud, two years after splitting with her husband of 14 years Robert Lange -- who allegedly had an affair with Thiebaud's then-wife.

Twain and music producer Lange had married in 1993, six months after meeting. Living between homes in New Zealand and Switzerland, the couple had a son who was six when they separated.