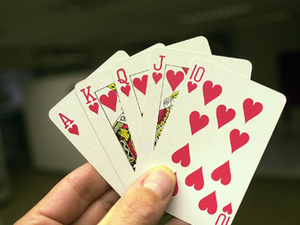 Eleven percent of the fee for the contest, which he described as a "very interesting game of millionaires," would be donated to Laliberte's anti-poverty nonprofit foundation One Drop.

The always-theatrical Laliberte dumped $1 million in money bricks on a felt table and declared it his buy-in for the event titled The Big One For One Drop, scheduled for July 1, 2012 in the same room at the Rio in Las Vegas.

He said he has buy-in commitments from 14 others, including well-known pros like Johnny Chan and Daniel Negreanu, as well as billionaire Phil Ruffin, who owns the Treasure Island casino in Las Vegas.

Laliberte and the WSOP have capped the number of entrants at 48, and if they garner that many players, the top prize could be nearly $20 million.

But the tournament only needs 29 players to boast a top prize of more than $12 million, which would be the biggest champion sum in tournament poker history.

Up to now, the biggest payout ever was $12 million won by Jamie Gold of California as the champion of the WSOP's 2006 Main Event. Payout structures always depend on the price of entry and the number of players.

"This is an extraordinary challenge, finding 48 people to give $1 million, it's never been done," Laliberte said. "But the upside is for One Drop."

Of each $1 million entry fee, $888,888 will become prize money while $111,111 will go to One Drop, a Montreal-based non-governmental organization that aims to help provide potable water in impoverished areas of the world.

The price of entry is ambitious, given that the most expensive previous poker buy-in was a $250,000 buy-in event in Sydney in January that drew just 14 entrants and paid out $2.5 million.

To sweeten the deal, the Big One will be an officially sanctioned WSOP event that also offers a bracelet, the most coveted trophy in the game. Only 11 of the 15 commitments are from specific players.

Caesars Entertainment, which owns the WSOP, committed to buy two seats and give them away at lower-level poker events over the year, and the Casinos de Quebec will buy one seat but has not yet announced plans to release it.

An unnamed European group also has committed to buying a seat to give away.

Despite being the host, Laliberte intends to compete in the tournament. A self-described amateur, he often enters professional events but believes his advantage may be that he is so wealthy it would not matter to him if he lost.

"This is a lot of money for many people, so the game might be balanced a little bit between the billionaires or millionaires and the professionals because of the values are different," he said.