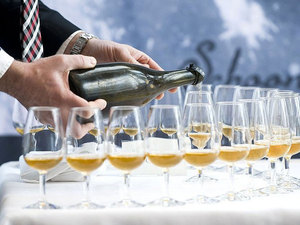 Samantha Compono, spokeswoman for the specialty wine auctioneer Acker Merrall & Condit told Agence France Presse that the bids should exceed the previous record set in 2008, when a bottle of 1959 Dom Perignon sold for $40,000 (27,600 Euros).

The bottles, one of Veuve Clicquot and one of now-extinct champagne maker Juglar, are nearly 200 years old and were discovered last July in a shipwreck that sunk between 1825 and 1830 to the bottom of the Baltic Sea near Aaland archipelago.

"There is a lot of interest in the sale," Compono said, adding the auction would also include the sale of more than 40 other exclusive bottles from the cellars of Veuve Clicquot.

In November 2010, when two bottles of the ancient champagne were uncorked for the world's media and wine experts to taste, champagne expert Richard Juhlin told Agence France Presse that the bottles could fetch up to 100,000 Euros each.

But Aaland government spokesman Bjoern Haeggblom said Friday he was wary of making such exuberant predictions "for just one bottle" of champagne.

"No one really knows what they'll sell for. And we have to keep in mind that if it sells for just 28,000 Euros, that's still a world record," he pointed out.

The local Aaaland government said it would donate all of the profits to charitable causes including help for the Baltic Sea environment, marine archeology and maritime history.

Compono said that the Ritz-Carlton in Moscow offers a bottle of vintage 1907 Heidsieck for $275,000 dollars.