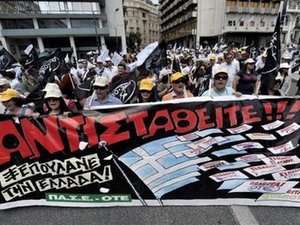 Trade union protesters on Friday occupied the Greek finance ministry, calling for a general strike as Athens finalized a crucial new loan deal with the EU and the IMF.

Members of the Communist-affiliated PAME union unfurled a giant banner from the roof of the ministry on central Syntagma Square, calling for a general strike against a coming wave of additional austerity measures.

"From dawn today forces of PAME have symbolically occupied the finance ministry, calling on workers to rise, organize their struggle and prevent the government's barbarous and anti-popular measures from passing," the Communist-affiliated syndicate said.

Hours earlier, government spokesman George Petalotis had been heckled and pelted with fruit and pots of yoghurt by protesters as he arrived to give a speech at an elder people's home at the Athens suburb of Argyroupoli late Thursday.

He was later evacuated by police without injury.

The government blamed the incident on the small Left Coalition party which has led street protests against the government, and whose young leader Alexis Tsipras has famously likened Socialist Prime Minister George Papandreou to former Chilean dictator Augusto Pinochet.

Papandreou is due to Luxembourg later Friday for talks with the eurozone's head policymaker Jean-Claude Trichet on Greece's economic crisis.

Greek newspapers reported Friday that tortuous four-week talks with the EU, the IMF and the European Central Bank for a critical tranche of loan funds had concluded and that announcements were expected later in the day.

Financial daily Naftemboriki spoke of a new "three-year rescue deal" in return for a new loan worth over 60 billion Euros ($86 billion).

"A report (on the conclusion of negotiations) and the coming new aid package is to be announced today, according to sources," added pro-government daily Ta Nea.

The new rescue deal is to be rubber-stamped by EU finance ministers at a meeting on June 20, Ta Nea added.

Athens needs an installment of 12 billion Euros ($17 billion), part of an overall 110-billion-euro loan rescue from the three organizations, to pay next month's bills.

But with its economy still in the doldrums, Greece is also trying to broker additional loans from the so-called 'troika' which rescued it from bankruptcy last year.

Additional austerity measures adopted by the government to clinch a new bailout have sparked mounting anger.

And a 50-billion-euro privatization drive of state assets meant to reduce the debt, including major companies such as the country's main telecoms and electricity operators, have caused further outrage.

Since last week, tens of thousands of Greeks have gathered at Athens' main Syntagma Square to protest against successive waves of spending cuts and tax hikes that have brought a deep recession and many layoffs.

The country's main unions on Thursday called another general strike on June 15, the third this year against the government's economic policies, and a round of mobilizations on June 9 at state companies under privatization.