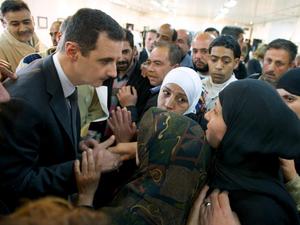 Syria's embattled President Bashar Assad paid an unexpected visit to an educational center in the capital Damascus on Wednesday, the presidency said on its official Facebook page.

"President Assad made a surprise visit to the Educational Center for Fine Arts where the education ministry was honoring the families of students who were martyred as a result of terrorist acts, to honor the parents himself," the presidency wrote, alongside photos of Assad at the center.

The visit appeared to be Assad's first public appearance since he attended prayers at a mosque in a northern district of Damascus to mark the Prophet Mohammed's birthday on January 24th.

Before that he had not been seen in public since a rare speech to supporters on January 6, in which he dismissed calls for his removal and said he had no partners with whom to negotiate for an end to the conflict.

In photos posted on the presidency page, Assad is shown meeting with relatives of those killed in the violence that has enveloped his country, killing more than 70,000 people according to United Nations estimates.

In one, he is shown looking at a poster featuring photos of victims, and in another, talking to a group of women, one of whom is clutching his hand.

The education center specializes in training teachers of the fine arts, and is in the Tijara neighborhood of eastern Damascus, near Jubar district, where fighting has raged for months between regime and rebel forces.

The visit came a day after the regime accused opposition forces of using chemical weapons in their battle to oust Assad, a charge the rebels denied.

All dictators make surprise visits to the capital before their fall...The butcher's time is coming....GO FSA...kill the bastard...

hey allouchi and gabby
I think you guys should change your tune a little bit
All the opposition is in diserray
look FSA doesn't support Mr. Hitto, the National coalition just lost 21 of its members, whats going on
I think KSA and QATAR should ask for their money back

Reminds of of Saddam's last days in Baghdad visiting the "adoring public", there was even a dude there dancing for him, I donno why! Maybe he thought that Saddam will like his dancing and take him home with him.

Where are the snipers when you need them?

The Truth (Guest) over 7 years

I remember Qaddafi driving around Tripoli a couple of weeks before they overthrew him and he had crowds of 'supporters' too.

When he heard there was a Damascus Education Center Bashar was shocked and he rushed there to make sure they are not educating anyone, he then renamed the place the Damascus Reeducation Center.

last gasps of a ridiculed regime. As the old quotes goes tell me who your friends are and I will tell you who you are. Here is a prime example of the axis of evil.....his Venezuelan chump just croaked all he has is Iran and Clown in Lebanon supporting him how lonely.

how sweet your love for bashar is... a real come out