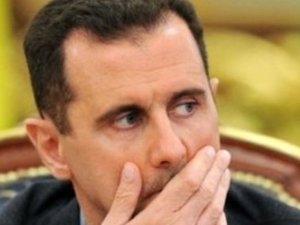 A rumor about the death of Syrian President Bashar Assad was massively shared on social media websites on Sunday, the French weekly magazine Le Point reported.

"News about Assad being shot dead by his Iranian bodyguard have not been confirmed yet,” the magazine said, revealing that the opposition's Free Syrian Army has denied such reports.

Noting that "tweets and Facebook comments helped in largely and rapidly disseminating the rumor”, Le Point remarked: “Social media websites were the primary source of this rumor.”

The reported news shared that Assad was shot on Saturday and was transferred to a Damascus hospital, as roads were blocked and buildings surrounding the location were firmly seized by the Syrian army.

Meanwhile, other websites said: “Israeli and Lebanese sources have confirmed the death of Syria's president.”

I hope that this is not true!

If this is true, The United States needs to move in within 24 hours to secure those chemical weapon stockpiles.

You people are sick & fools who believe everything your Zionist controlled media tells you!!

@al-kafi, shame on your sectarian remarks. This is exactly what Lebanon doesn't need.

Lol - so true, and I am a Shia apostate. To hell with Imam Khomeini, Imam Hussein, Imam Ali, and the greatest charlatan that ever lived -- Profit Mohammad the assassin and paedopile.

Yawn.. And this affects me here in NY how???

Why is the social media entertaining such wild rumors? Can't anyone wait for evidence before spreading such stuff?? Spreading wild rumors of this kind only exacerbates the crisis entangling the region. Cool it.

I deem this to be something other than clear and convincing.

(Which doesn't mean the rumors are false, either.)

You people are such cattle I'm amazed you could all sit in the upright position in front of a computer to write that gibberish. Assad is the last good thing left about the Middle East. Wake up.

thanks for pointing out the obvious. did my questions not give you a hint on my skepticism?

In addition, the sources say Social media was first sources of this info, every one knows about fB, tweets, and etc. That is none sense rumour to me

aren't you all jumping the gun a bit, Nothing really confirmed yet, lol you guys are becoming worse than women gossiping. you cant believe everything you read until you have some solid evidence.

unfortunately, rumors of his death are greatly exaggerated. :(