China's Growth, and Weakness, on Show at IT Fair 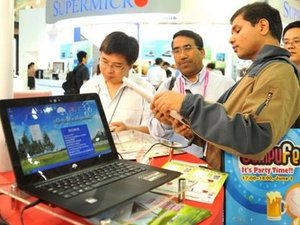 More Chinese companies than ever took part in Asia's largest IT fair, which ended this weekend in Taipei, but their growing numbers could not disguise their lingering weaknesses, observers said.

China has a lot of catching up to do when it comes to innovation, not least when compared with the host of the five-day Computex fair, the small but savvy island of Taiwan, which punches above its weight in technology.

"There's no denying the Chinese have carved out niches in some items, like computer casing and power systems," said Chang Li, deputy secretary general of the Taipei Computer Association, the co-organizer of Computex.

"But generally speaking, Taiwan companies are still ahead in all the PC-related fields."

With more than 1,800 exhibitors present at Computex, it was easy to lose sight of the roughly 220 Chinese companies at the sprawling event.

And while the mainland presence was up from just 100 enterprises last year, most occupied small booths, squeezed in between much larger and better-known multinational brands.

"Even Samsung and Acer sent people to our booth to have a look at our tablets," said Lily Lee, a sales manager with the company.

But the product would never have made it this far without the close cooperation of more experienced companies from other countries, she said.

Sandget's tablet, known as Joydroid in China, featured a screen supplied by South Korea's LG Corp., and the design of the entire device was carried out in Taiwan.

"Taiwanese companies are more tuned in and better at gathering information on new trends," Lee said.

China is fully aware of the need to upgrade its technological capabilities, and has made it official policy to become a "world power" in science and technology by the middle of this century.

However, it has a long way to go from its current situation where about half its technological know-how is imported.

This is according to China's State Council, the nation's cabinet, which derived the measure by taking technological know-how as a percentage of the sum of technology imports and domestic spending on research and development.

Part of the problem is that China still does not provide an environment that makes it profitable to spend time and resources on lengthy research as opposed to copying the inventions of others.

"An effective patent policy system to encourage and protect innovation has not been fully established," the Chinese government admitted in a recent document.

China also still battles with its historical legacy as a largely agrarian economy that only recently made the leap into the modern age.

"China's PC sector was off to a late start, getting going about 20 years after Taiwan's. I believe it'll be hard to catch up," said David Lee, chief of the Shanghai unit of Topology Research Institute, a Taiwan think-tank.

However, China will not stay weak forever, and in some areas, notably telecommunications, it has emerged as a mighty player, he said.

China stands to benefit from a trend that renders hardware a commodity that can be produced anywhere, while software and content are areas where individual companies can still shine.

For example, to develop an online game that appeals to Chinese adolescents, game developers must know what kind of heroes have a resonance and what kind of monsters are scary. They must know the culture from the inside.

No one is better positioned to create content suited for China -- the world's biggest online market with nearly half a billion users -- than the Chinese themselves.

"Content and service have become ever more important, and more crucial than hardware. Localization of content is playing a key role now," said Topology's Lee.