Shark Fin: A Soup with Bite 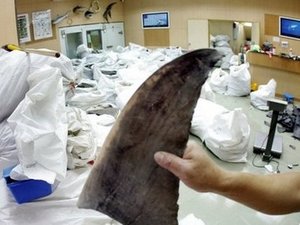 First a golden ladle is laid on its own gleaming stand. The steaming dish is brought out from the kitchen and a dedicated waitress decants it into individual bowls, without spilling so much as a drop of the precious liquid.

For the Chinese diners in a specialist Hong Kong restaurant, smiling with anticipation, it is the highlight and centerpiece of the meal, but for environmentalist critics it is one of the worst foods in the world -- shark's fin soup.

"It’s full of nutrition," said Lisa Lau, a housewife, who was marking her birthday with friends. "In Chinese culture, when a family go out to eat together or when we treat friends we will eat something good. If we want to order something good, most times we will order shark fin."

To a Western palate, it is nothing special, a slightly chewy morsel devoid of a flavor of its own, and benefiting from the vinegary dressing served alongside.

But for the Cantonese who consume it, shark’s fin has an appeal that is all its own -- a culinary experience in which taste is among the less important factors.

Being seen to be eating it, said Lau, gives "face", the all-important Chinese concept of status and social standing, while hosts offering it to guests demonstrate their wealth.

"Because shark fin is expensive, when you serve shark’s fin at a party, the party will be better."

It is the look of the fins that matters, and their size. Bigger is better, so that dorsal fins are preferred to ventral or pectoral -- although retailers say the tail also commands a premium.

Fibre width varies by species, with thicker ones, such as from tiger sharks, denoting higher -- and more costly -- quality.

Tam Kwok King, the manager of the Fung Shing restaurant in Kowloon, has worked in the trade for more than 50 years. The establishment is renowned as one where diners can order shark’s fin soup on the spot rather than in advance, and gets through around 200 kilograms of fins a week.

"When holding a party, it is not respectful if you don’t treat the guests to shark's fin soup. You will feel you lose face," he said.

"From the view of traditional Chinese medical science, drinking shark fin soup can strengthen the body and improve health. It is good for the bones.

"The most important thing is that the soup must be cooked well. It takes time to stew the shark fin. If you do not cook it for long enough, the shark fin is not delicious and it does not look very good."

In the kitchen, the dry fins are first soaked for hours, developing a rubbery appearance, before being flash-fried with assorted spices and condiments on one of five giant burners.

The soup -- which includes other ingredients such as chicken for flavor -- is then assembled and cooked in an oven for four hours, by which time the fins are soft, translucent, and reduced to a fraction of their original size.

Environmentalists object to shark finning as cruel and wasteful on the grounds that the fins are often cut from live sharks which are then dumped back into the sea to die.

They also say it is leading to a rapid decline in shark populations, pointing out that as apex predators they have a vital role in the marine ecosystem.

Silvy Pun, of the conservation group WWF in Hong Kong, said: "Most of my friends think that it is just once-in-a-while that we have shark fin soup, there shouldn't be a big problem.

"However, our occasional consumption fuels a lot of boats to hunt shark all over the world. We are consuming 2-5 percent of a shark which takes an average 10 years to reach maturity.

"Sharks do not have enough time to grow and replenish themselves."

But Veronica Mak, an anthropologist at the Chinese University of Hong Kong, said that shark's fin soup has a vital cultural role, pointing out that as well as the ingredient being expensive, the preparation is highly skilled.

"We have a popular saying in Cantonese that ‘a banquet is legitimated by a dish of shark’s fin’," she said.

"Important banquets, like weddings, which people hopefully have only once in their life, usually include shark’s fin. This is especially important for the middle or even lower class, to show ‘face’ to the relatives.

"There is a big difference in price for a banquet with and without shark’s fin, so serving shark’s fins to your business partners or relatives or friends shows off your economic and cultural capital at the same time."

The demand is such that Hong Kong is the global focus of the shark fin trade, with the WWF estimating that between 44 and 59 percent of the world’s fin catch passes through the territory.

According to Hong Kong government figures for 2009, the most recent available, that came to more than 9,000 tons with a value of HK$1.9 billion at wholesale prices -- around HK$200 per kilogram.

Retail is another story. The centre of the shark fin business on the island is Des Voeux Road West, where shops are packed with assorted dried foods from sea and land.

The largest is Wing Yue Marine Food, where large presentation shark fins for gifts, with the skin still attached, sell for HK$12,800 (U.S.$1,600) per catty, a local measure of weight equivalent to 604 grams, and basic cooking fins can cost more than HK$6,000 per catty.

Kelvin Wong, the owner, dresses in jeans, a polo shirt, and a jewel-encrusted Rolex. With the Chinese economy booming, he says he is seeing growing demand from mainland China and dismisses the concerns of environmentalists.

"Western people may not understand what shark’s fin means to Chinese culture," he said. "People shouldn’t criticize other people because they eat something Western people don’t eat."

Nonetheless there are signs that attitudes are changing among Hong Kong’s urban younger generation. She On Kuen, who has a small store in a back street, has been selling fins for decades and says that nowadays "for weddings young people choose not to eat it" for environmental reasons.

"We human beings have to control the number of sharks as they are dangerous," he said. "Westerners object to the consumption of shark fins only because it is inhumane. But sharks are inhumane too when they bite."

"We human beings have to control the number of sharks as they are dangerous," he said. "Westerners object to the consumption of shark fins only because it is inhumane. But sharks are inhumane too when they bite."

that's one heck of an argument! If sharks are dangerous, then await the danger that results from removing them from their niche.

Western people may not understand what shark’s fin means to Chinese culture and that's new evidence of U.S. efforts to steal our wealth.