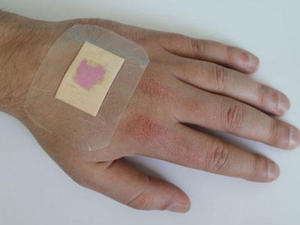 Australian researchers have developed a "smart" bandage that changes color as a wound worsens or improves, potentially leading to the better treatment of ailments such as leg ulcers.

Lead inventor Louise van der Werff, a materials scientist at the Commonwealth Scientific and Industrial Research Organization, said the dressing would change from red to blue depending on the temperature of the wound.

"If the wound becomes infected then it typically gets warmer. It would get cooler if there were, for example, a compromised blood supply," she told Agence France Presse on Monday.

Van der Werff said wound changes were not always obvious and the fiber she helped devise, using liquid crystals which react to different temperatures, could show changes of less than half a degree Celsius.

"A temperature is sort of an obvious indication -- if they can see that through a color change then hopefully it can help a lot," she said.

Van der Werff, who is completing her doctorate at Monash University in Melbourne, said plans were underway to incorporate the color-changing fiber into a textile which could then be woven or knitted into a wound dressing. "Our main target is for chronic wound care -- the elderly, obese and people with diabetes who can get wounds like leg ulcers and pressure ulcers and things like that which can really last a long time without healing properly," she said.