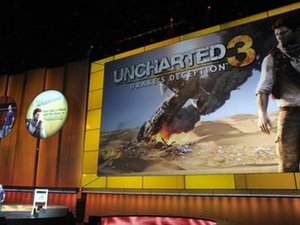 Sony introduced its new-generation "PlayStation Vita" gaming handset and blockbuster 3D console titles as it sought to shake off the stigma of cyberattacks on its system.

The Japanese entertainment giant turned the Los Angeles sports arena into a music and videogame mega-hub starring exciting new game play and hardware on the eve of the Tuesday opening of a premier Electronic Entertainment Expo (E3).

"This is not the first time I've come onto the stage at E3 with an elephant in the room," Sony Computer Entertainment of America chief executive Jack Tretton told the 6,000 people packed into the arena.

He apologized to people who use the PlayStation Network (PSN) to connect to games, films, and music online through PlayStation 3 (PS3) videogame consoles.

PSN was shut down after hackers broke in and looted user data. Sony brought the system back online gradually the week before E3 after hardening its defenses.

Tretton thanked PS3 fans for their loyalty, saying the level of online traffic at PSN was already more than 90 percent of what it was before the disruption and that console sales jumped last week.

Sony executives got apologies out of the way quickly and focused on a lineup of videogames packed with vivid 3D titles such as the next installment of the beloved "Drake's Fortune: Uncharted" franchise to be released in November.

"Our commitment to 3D is unwavering," Tretton said, noting that Sony would soon boast more than 100 titles in the format including a collector edition of "God of War" titles.

In a bid to make 3D more ubiquitous, Sony will release a 24-inch (61-centimeter) display for the format bundled with special glasses, an HDMI cable, and a copy of the coming "Resistance 3" videogame at a package price of $500.

The components will also be sold separately.

Tretton boasted that the accompanying 3D glasses would accomplish the unprecedented feat of letting two people play a game together on a shared display but each see only their setting without any "split-screen."

Sony expanded the appeal of its Move motion-sensing PS3 controls with an array of sophisticated titles, including basketball, shooters, and a coming version of "Bioshock" tailored for the devices.

"Vita" was chosen because it is Latin for "life," Hirai said, explaining the gadgets are designed to "blur the line" between game life and real life with augmented reality and other features.

PS Vita is to launch in Japan, Europe and the United States by the end of the year. Telecom giant AT&T will be the exclusive carrier in the United States, Hirai said, eliciting groans from the audience.

PS Vita featured a five-inch (12.7 cm) multi-touch OLED screen with a touch control pad on the back for "touch, grab, trace, push and pull" finger motions. The handset also had front and rear facing cameras.

Pre-installed software will tell PS Vita users when others with the gadget are in the vicinity for "location-based" gaming. A "Party" application will let players chat with one another using voice or text during games.

Hirai acknowledged that PS Vita is launching at a time when smartphones are becoming increasingly popular gaming gadgets but was confident that the new-generation portable would win over players.