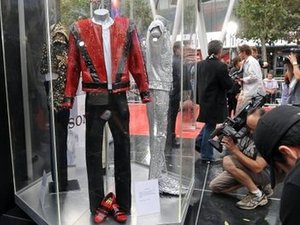 The iconic black and red jacket worn by Michael Jackson in his "Thriller" video is to go under the hammer at a two-day Music Icons Exhibition in Beverly Hills.

The jacket is among 600 items that will go on sale at Julien's Auction Gallery, including memorabilia from musicians such as The Beatles, Madonna and Lady Gaga, Frank Sinatra, Elvis and Justin Bieber on June 25 and 26.

Jackson's Thriller jacket became the prototype for future costumes for the pop musician. The calf leather jacket includes an inscription by Jackson on the inside lining.

Jackson's personal doctor, Conrad Murray has been charged with manslaughter after the pop icon died suddenly on June 25, 2009.

Murray has denied the accusations and said that on the day of the 50-year-old singer's death, he administered only a small amount of the drug. His trial has been postponed until September.