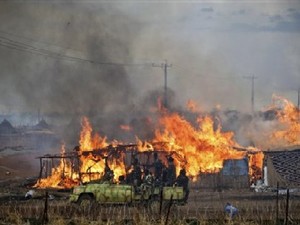 The United States called Tuesday for clashes in Sudan to "cease immediately," expressing concern over reports of several fatalities in the fighting between the northern and southern armies.

"Unilateral military actions that prejudice the outcome of negotiations on future political and security arrangements for Southern Kordofan and neighboring Blue Nile state must cease immediately," he added.

"Parties must make good on their commitment to the Sudanese people and the international community to stay on the path of peace," Toner said, stressing that Washington urged Sudanese leaders "to meet immediately to resolve these issues peacefully and expeditiously and to refrain from further actions that could cause additional violence and human suffering."

Hua Jiang, a spokeswoman for the United Nations Mission in Sudan (UNMIS), told Agence France Presse that the gunshots were heard in Kadugli Tuesday, and that the fighting "is between elements from the SAF (Sudanese Armed Forces -- the northern army) and the SPLA (Sudan People's Liberation Army -- the southern army)."

She said that earlier U.N. staff saw some 3,000 people taking refuge at the Kadugli police hospital.

A U.N. source in Kadugli said that since Monday all U.N. agencies had suspended their operations in the state capital, where the United Nations has a large presence, and had withdrawn to the UNMIS peacekeeping compound near the airport.

Toner said the U.S. administration calls on Sudanese leaders "to provide the U.N. mission in Sudan full and unimpeded access required to protect civilians and ensure humanitarian access and contribute to efforts to maintain the fragile peace between Sudan's North and South."

Tensions are escalating in South Kordofan, the north's only oil-producing state, which borders the south and was a key battleground during the 1983-2005 conflict.

The United Nations said Monday that it was "deeply concerned" about the deteriorating security situation in South Kordofan, less than three weeks after northern troops and tanks overran the flashpoint Abyei border region nearby.

Since then, Khartoum has repeatedly ordered northern SPLA troops, which it says are "illegal," to either disarm or redeploy south of the 1956 borders before southern independence in July, threatening unspecified consequences if they fail to do so.