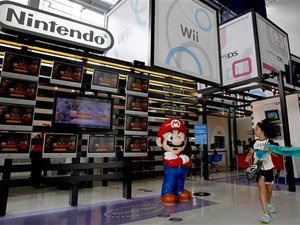 Nintendo stock plunged Wednesday in Tokyo despite the much ballyhooed unveiling of the Wii U, the successor to its hit Wii video game console.

The demonstration of a prototype at the Electronic Entertainment Expo, the gaming industry's annual convention, in Los Angeles on Tuesday, appeared to leave investors disappointed and skeptical.

Shuji Hosoi, analyst at Daiwa Securities Co., said it was unclear how successfully the machine would compete against smartphones and tablet PCs, when device-based gaming was already having to vie against social networks.

It is hard to see how it was different enough to woo users of smartphones and tablet PCs back to gaming, he said.

"People are puzzled whether this will really sell."

Hosoi acknowledged the stock price may recover if Kyoto-based Nintendo could convince investors that the new machine was as fun as smartphones and other new devices.

"But it would be extremely difficult because the competition is so intense," he said, referring to products such as the iPad from Apple Inc. and other rivals. "People have already changed."

The Japanese gaming giant behind Pokemon and Super Mario games said the Wii U will broadcast high-definition video and feature a touchscreen controller that can detect motion. Its price was not disclosed.

Nintendo said the Wii U will be released between April and December next year and will be compatible with older Wii games and controllers.

Sales of the Wii have slumped for two years. But the Wii remains the overall top-selling home video game console against Microsoft Corp.'s Xbox 360 and Sony Corp.'s PlayStation 3.