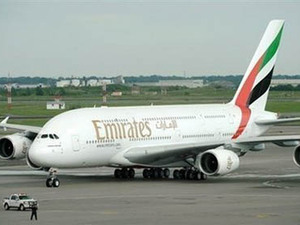 Emirates airlines on Monday posted a 351 percent increase in net profits in six months, reaching 3.4 billion dirhams (925 million dollars), on the back of growing customer demand, a statement said.

The Dubai national carrier said the net profits in the first half of its current financial year compared to 752 million dirhams in the corresponding period of the previous year.

"The results for the first half of the 2010-11 financial year are incredibly robust, and reflect Emirates' success in growing customer demand, supported by investment in new aircraft, products and customer service," said Sheikh Ahmed bin Saeed al-Maktoum, chairman and chief executive of Emirates Airline and Group.

Emirates, which recently faced fierce accusations in Europe of benefiting from state subsidies, boasted it was investing its own profits to grow.

"We continue to invest our profits in growing the business and our healthy financial position enables us to successfully meet all of our financial commitments and raise financing for future aircraft deliveries," Sheikh Ahmed said.

"Our strong position today is reflective of our ability to adapt, returning us to a vigorous period of growth," he added.

The largest Middle East carrier said it carried 15.5 million passengers in six months, up 17.3 percent from the first six months of the previous year, with a passenger seat factor of 81.2 percent.

It also mentioned that it had made new orders for 62 aircraft.

"With 62 new state-of-the-art aircraft ordered in the first half, we remain well positioned to capitalize on this growth," Sheikh Ahmed said.

Emirates ordered 30 Boeing long-range 777 aircraft worth a combined 9.1 billion dollars at Farnborough in July, a month after it had ordered a further 32 Airbus superjumbos.

Emirates' total revenue, including other operating income, reached 26.4 billion dirhams in the first half of the year, up 35.5 percent compared to revenue of 19.5 billion dirhams during the same period last year, the company said.

SkyCargo revenues contributed around 17.8 percent of the airline's transport revenue.

Air France chief Pierre-Henri Gourgeon last month accused Emirates and other Gulf carriers of raising their market share through support from their governments.

He claimed that Emirates pays very limited airport charges and fuel tax at its Dubai hub and escapes many of the social charges that weigh on European companies.

Established in 1985 with just two leased planes, the carrier now boasts a fleet of 137 aircraft, flying to 100 destinations in 60 countries.

It has turned Dubai's airport into the busiest in the region after becoming a major transit hub between Europe, Asia and Australia.(AFP)